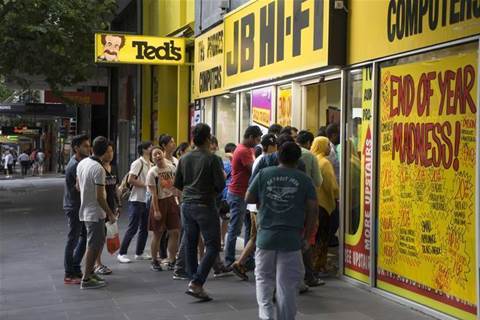 JB Hi-Fi has launched its own on-demand delivery service in Victoria but the retailer’s chief executive is skeptical the business case for the proposition will still stack up once restrictions are lifted.

Speaking during The Australian’s E-Commerce Summit yesterday, JB Hi-Fi CEO Richard Murray said the business spun up an Uber-like service internally because they feared the logistics system might break and staff would need new jobs to do.

Murray said JB Hi-Fi currently has 75 SUVs on the road and if shoppers make an order by 2pm and used the door-to-door service it will be at their home by 8pm.

The new 'store to door' service is delivered by a JB Hi-Fi team member.

The lack of traffic on Melbourne streets, the ability to find parking and make a delivery to someone at home under lockdown are all leading to “really efficient” delivery times, Murray said.

However, service levels that are possible now may not be achievable when life returns to normal.

“What does Covid normal look like? Suddenly you're trying to find a park in South Melbourne in the middle of the day for the store vehicle to pull over.”

According to the company’s annual report, total online sales across the group, which includes JB Hi-Fi New Zealand and The Good Guys, grew by 48.8 percent to $597.5 million, representing 7.5 percent of total sales, in the 12 months to June 30.

At the height of the pandemic, the retailer recorded a significant acceleration in online sales in Q4, up 134 percent.

That volume was handled by JB Hi-Fi’s new Shopify Plus e-commerce platform, which went live in September 2019.

Murray praised the performance of Shopify, saying “the old platform wouldn’t have handled” the surge in online traffic and transactions.

“To be honest JB just should have invested the amount of money we spent on the online site in Shopify shares - that would have been the best return we’ve ever made,” the CEO joked.

Despite the boom in online sales, Murray said JB Hi-Fi is not making technology investment decisions differently today than before the pandemic.

“Even on our best day, it [online share of sales] gets to 20 percent, it’s still 80 percent instore,” Murray said, adding he is “completely indifferent between online and in-store” in terms of cost.

Murray said JB Hi-FI has 10 squads internally working on IT projects and the online business, and that investing more may not achieve outcomes any faster.

“Every squad is a $1 million. So you want more squads, but the problem is if you get more squads they start climbing over each other and you actually don't go faster.”

Murray said the challenge is to innovate quickly and still deliver a seamless experience.

“Speed is just one element, making sure these things all join up at the end is not without complexity," he said.

Grow your software revenue by selling these 5 affordable, essential tools for the modern workplace
By Tess Bennett
Oct 23 2020
10:51AM