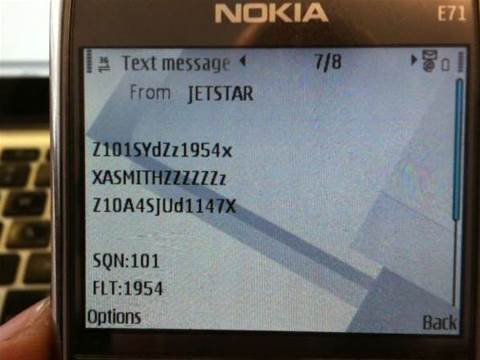 Low cost airline Jetstar plans to deploy netbooks and SMS boarding passes before the end of this year, according to the company's CIO Stephen Tame.

Speaking at a roundtable discussion in Sydney this morning, Tame said the netbooks were the ideal solution for Jetstar because they were cheap, reliable and mobile.

"The batteries last seven hours, they have solid state disks so no moving parts, and a built in 3G card. The idea is [airline staff] open up the netbook and turn it on. It takes between 60 and 80 seconds to boot up and find a connection. It then establishes a synchronised secure connection [to Jetstar's network], and then you can start boarding the plane," said Tame.

The netbooks will allow the airline to bypass expensive connectivity costs at airport departure gates.

"The problem with airport gates is that they are generally 100 meters away from the networks. Running wired networks is quite expensive -- it can cost $10,000 to run a piece of cable down the airport channel -- and you can't use 802.11 because the airports try to monopolise that and charge you for it," said Tame.

Jetstar had ordered 40 netbooks, which will be used in around 22 airports. Tame said they will only be required in airports where connectivity at the gate was either unavailable or too expensive.

"In New Zealand, I have connectivity at all the gates because Qantas moved out and we moved in and they already had it wired. In Sydney and Adelaide airports we have connectivity but in all the other airports we don't. Most airports only have one gate but some have two or three, so [40 netbooks] works out," he said.

Tame expected to get his hands on the first batch of four netbooks within four weeks, after which they will be tested for reliability. Should they pass the test, he will order the remaining 36 and hopes to have them deployed within three months.

SMS boarding pass
Alongside the netbooks, Jetstar planned to introduce SMS-based boarding passes. The idea was that passengers would check in -- either online or at a counter -- and then receive a text message containing three lines of code that would be scanned at the boarding gate.

The airline was developing a handheld scanner capable of reading the SMS text directly from a passenger's mobile phone.

Tame expected the scanners would take two seconds to process each passenger and correctly scan the message from any make or model of mobile phone, even a very old "Nokia brick", with 95 percent accuracy.

No more PCs
In another cost-saving move, Jetstar has deployed thin clients to all of its check-in desks.

"If you go to a Jetstar counter at an airport you will not see even one PC. Check-in counters, engineering and backoffice are all thin client," said Tame, who claimed the move had slashed airport management costs by 60 percent and maintenance costs by 40 percent.

In addition to its 400 thin clients, the company has about 200 PCs, but not for long.

"I'm going to remove the remaining PCs. If you have a PC and it doesn't move, why do you have it? It should be a thin client. We have been in business since 2004 and the PCs are getting to be four years old so I am not going to buy new ones, I am just going to replace them with thin clients," he added.

Grabbing the hybrid cloud opportunity with Lenovo and Azure Services
By Munir Kotadia
Sep 4 2009
8:50AM