John McAfee is apparently on the run again, this time from the SEC over his support for cryptocurrencies 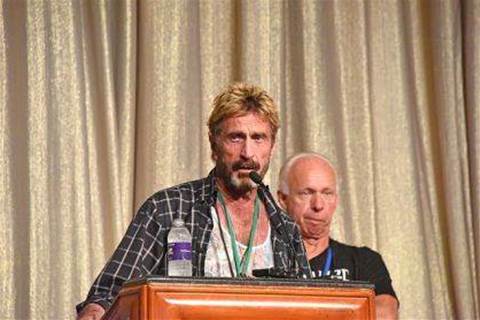 John McAfee has "gone underground" in an apparent bid to flee the US Securities and Exchanges Commission, claiming that the agency has too much power and implying that it even carries out covert assassinations.

"The SEC was never intended to have this power," said McAfee in a YouTube video, speaking from 'an armoured motorcade in an undisclosed location'.

"Please God, America, wake up and see what has happened. The SEC is in charge of our entire industry; our companies, our manufacturing, our distribution, our creativity, our entrepreneurship.

"The SEC owns America," he said, "and if you think that an agency of the US government would not stoop to assassination, kidnapping, threats, then what are you smoking?"

"The SEC is one of the most powerful agencies in the world," he said in a separate YouTube video. "It is out of hand, and it does not anymore represent American values or the American people."

In reports published by Rob Loggia, with whom McAfee works on various cryptocurrency projects, he claimed the SEC sent agents to watch him at his secluded home in Tennessee, citing unusual traffic patterns and repeated visits from a small low-flying plane.

In order to fox his pursuers, McAfee has gone "on the run", and claims to have enacted an elaborate scheme in which he and his team hire body doubles, repeatedly change locations and swap electronics on a daily basis.

While our pursuers are chasing our smartphones, carried by poor look-alikes, across 2 states, we've been busy. To add to the entertainment, Mr. McAfee will no longer charge $1000,000 for a tweet. It's free. Send any tweet to TheMcAfeeboys@gmail.com. we'll randomly pick 5 per day.

McAfee claimed that the SEC – the agency which governs the US stock market and other financial markets – is out to get him over his support and promotion of cryptocurrencies, which he said have the power to make the SEC obsolete.

McAfee, the controversial founder of the cyber security company that once again bears his name, is perhaps best known for his colourful past.

This is not his first time on the run; he was previously sought for questioning over the murder of one of his neighbours in Belize, and the prime minister of the country called him "paranoid [and] bonkers". He has also been accused of various crimes relating to firearms and intoxicants.

McAfee has become a prominent figure in the crypto world in recent years, setting up a consultancy firm, McAfee Crypto Team, to advise cryptocurrency firms on their ICOs. He also uses Twitter to promote various 'altcoins'.

These lesser-known cryptocurrencies are supposedly coins that McAfee himself believes in and has invested in, although many people have accused him of engaging in 'pump-and-dump' schemes – a form of financial fraud that is currently legal in the world of cryptocurrencies.

It is currently unknown whether or not McAfee is in fact being actively sought by any branches of the US government, but he has given no indication that his attempts to flee his perceived pursuers will be ending any time soon. John McAfee is still at large.