Kaspersky shifts all data for Australian customers from Russia to Switzerland 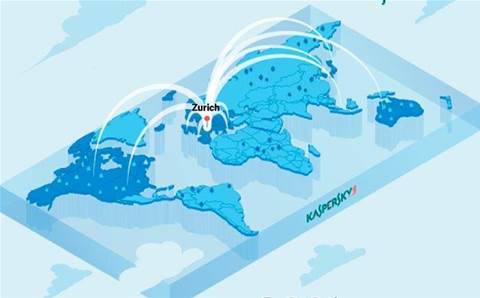 Kaspersky Lab has announced it will move the data it uses for Australian customers to Switzerland as it continues to respond to the "breakdown of trust" due to fears of Russian hacking.

The cybersecurity vendor said it would install 800 servers in a data centre in Zurich by the end of 2019 to store and process all information for users in Europe, North America, Singapore, Australia, Japan and South Korea, with more countries to follow.

Users around the world voluntarily share information that is then aggregated in the vendor's threat intelligence cloud, Kaspersky Security Network.

The move is part of its global transparency initiative, which was first announced in October 2017, which it said "reflects Kaspersky Lab’s ongoing commitment to assuring the integrity and trustworthiness of its products".

The company said in a statement: "The new measures are the next steps in the development of the initiative, but they also reflect the company’s commitment to working with others to address the growing challenges of industry fragmentation and a breakdown of trust.

"Trust is essential in cybersecurity, and Kaspersky Lab understands that trust is not a given; it must be repeatedly earned through transparency and accountability."

The Swiss facility will host a number of core processes, including customer data storage and processing for most regions, as well as software assembly, including threat detection updates.

As part of the move, the company's products and anti-virus threat detection rule databases will be assembled and signed with a digital signature in Switzerland, before being distributed to the endpoints of customers worldwide.

The migration will be supervised by an independent Switzerland-based third party "to ensure full transparency and integrity".

Chief executive Eugene Kaspersky said: “In a rapidly changing industry such as ours we have to adapt to the evolving needs of our clients, stakeholders and partners. Transparency is one such need, and that is why we’ve decided to redesign our infrastructure and move our data processing facilities to Switzerland.

"We believe such action will become a global trend for cybersecurity, and that a policy of trust will catch on across the industry as a key basic requirement.”

The major decision follows consistent bad news for the Russian-based cybersecurity vendor, which has faced mounting suspicion that it is too closely connected to hostile Russian intelligence agencies accused of cyber attacks on the United States.

The US government in July 2017 removed Kaspersky from two lists of approved vendors used by government agencies to purchase technology equipment.

The Department of Homeland Security in September 2017 told US agencies to remove Kaspersky Lab products from their IT systems, saying it was concerned the Moscow-based cyber security firm is vulnerable to Kremlin influence.

Just this week, the Dutch government decided to phase out the use of anti-virus software made by Kaspersky Lab "as a precautionary measure" and was advising companies involved in safeguarding vital services to do the same.