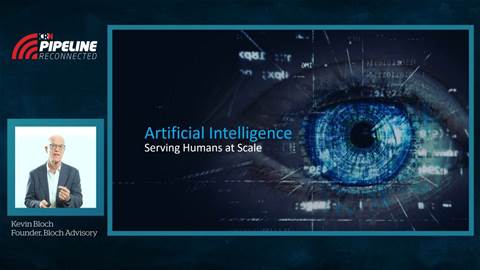 Endless public debate has been devoted to whether artificial intelligence will ever match the lofty promise of science fiction but noted technology analyst Kevin Bloch says it’s time to move on and to start asking what happens when it does.

In a short but confronting presentation prepared for CRN Pipeline Reconnected 2020, Bloch argued that the difficult groundwork for AI to become the dominant technology for the future has already been laid.

Bloch said that AI specialists were commanding double that of their colleagues in other software engineering disciplines and provided compelling examples to demonstrate machine ability to learn independently and rapidly by emulating reinforcement learning (based on
rewards) found in humans.

The computer science behind it, he argued, was no longer “linear”, meaning it would accelerate very rapidly, and noted the release, this year, of the third generation of AI predictive model, GPT-3 — which makes an astonishing 175 billion parameters available to machine learning developers.

However, Bloch warned the arrival of could also trigger a management crisis for humanity comparable to that energy regulators faced following the perfection of nuclear fission in the 1950s. Just as nuclear fission delivered a flood of energy that needed to be controlled and managed, AI would deliver a knowledge on an unprecedented scale.

“Where you got an infinite amount of knowledge how do you maintain and constrain that knowledge? That’s the question we’ve got to ask,” Bloch said.

Bloch acknowledged that for many it could be “frightening” subject matter to wander into, but he believes answers could be found in precedents set in — of all places — medical history.

There, he argued, an excessively timid approach to technology could have deprived humanity of some of its greatest therapeutic breakthroughs.

Watch the video to see Kevin tackle this difficult and fascinating subject matter with precision and clarity that his made him one of Australia’s best-known technology speakers.