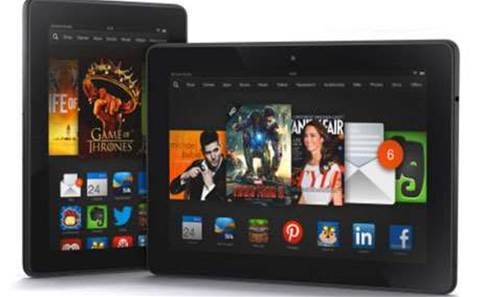 The Kindle Fire HDX comes in a 7in version and an 8.9in version. They feature a quad-core Snapdragon 800 2.2GHz processor and double the RAM of the Fire HD at 2GB, with Amazon claiming the new tables have three times the processing power. They offer 11 hours of "mixed use" battery life and 17 hours of reading time.

Both sizes will come with optional support for 4G, and both have a front-facing camera, while the 8.9in also comes with an 8-megapixel rear camera that takes 1080p video.

The new OS also supports Second Screen, a feature that allows you to watch shows and movies on your TV and use your tablet as a controller. That feature will arrive next month and work with PlayStation 3 and Samsung TVs, with support for the Playstation 4 arriving later this year.

Another new feature is the "Mayday button". Tap it, and within 15 seconds you're automatically connected to an "Amazon expert" to get support or ask for help with any feature.

Amazon also revealed new "Origami" covers, which work as stands in portrait and landscape modes. The versions for the 8.9in tablet have slider on the back to allow users to take photos.

The 7in Kindle Fire HDX will start shipping 18 October for $US229 for the 16GB version, with a 32GB and 64GB option also available. The 4G version will ship 14 November for $US329, with pre-orders starting today for both in the US.

Updated Kindle Fire HD
The Kindle Fire HD has been updated, too. It's now slimmer, with the body matching the style, if not the dimensions, of the HDX. It features the updated OS and has a lower price.

The previous edition cost $US199, but the updated model has been slashed in price to $US139. It will ship 2 October; again, no news on it getting down under. We can but hope.

Grow your software revenue by selling these 5 affordable, essential tools for the modern workplace
By Nicole Kobie
Sep 26 2013
8:06AM