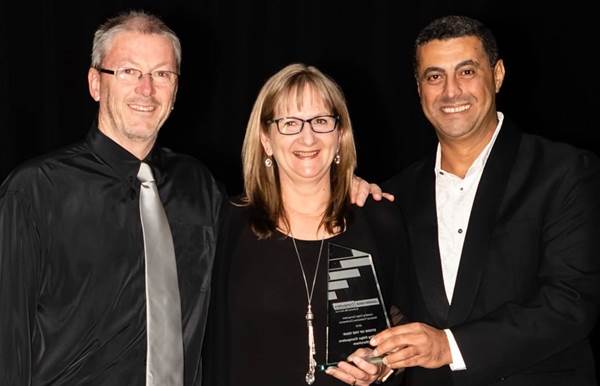 Leading Edge Computers has named Wimmera Office Equipment its store of the year, awarding company directors Helen Hannan and Bill Glenister during a gala awards dinner as part of the group’s national tradeshow conference in Melbourne.

The award recognises the member of the Leading Edge Computers group that supports the wider group with a great attitude, supports LEC branding, marketing initiatives and programs and has evolved, transformed and grown their business while being a member for more than 12 months.

Wimmera Office Equipment, based in Horsham, Victoria, has been a member of the Leading Edge Computers group since 2003. Its key vendors are Canon, HP, OKI, Kyocera, Ricoh, Lenovo and Epson.

The company has also recently rekindled a reseller agreement with Apple and updated its floor plan, which has seen foot traffic increase, it told CRN in February.

“We had a visit from a Leading Edge Computers support office staff member to help us with the floor plan when we were applying for the Apple brand.  We set up the e-commerce website that is supported, managed and supplied by LEC, which wouldn’t have happened if it was left to us to do,” Hannan said at the time.

LEC’s business of the year was Intuit Technologies from Hobart, one of the group's largest operations. Company director Pieter Kolkert took to the stage to accept the award. Intuit was also a finalist in CRN’s 2017 Impact Awards, for work it performed with Dell EMC in powering an IoT project for salmon farm Tassal.

In other awards handed out on the night, Nicola Walters of Leading Edge Computers Broome was named the local hero of the year. Synnex was named LEC’s supplier of the year, Lenovo received the brand of the year gong, while HP’s Mike Shulz was awarded outstanding account manager of the year award.

Cloud application revenue made easy
By Michael Jenkin
Apr 17 2018
8:00AM