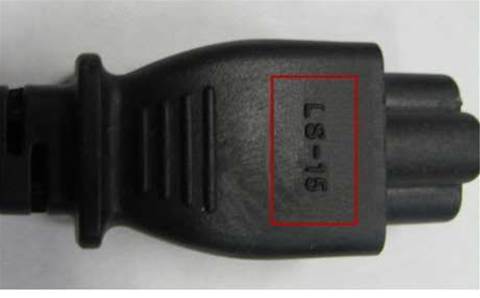 Lenovo has recalled over twenty thousand "LS-15" label power cords in use with numerous models of notebook computers, following similar actions by HP and Toshiba earlier this year.

The Australian Competition and Consumer Commission announced that affected AC power cables' electrical insulation may deteriorate and pose "a potential fire and burn hazard" upon overheating.

A report from Lenovo stated that 17 cases of "property damage to affected models due to power cord failures, together with minor property damage to surrounding personal property" had been notified to the vendor. None of the instances involved "personal injury" and none involved customers from Australia or New Zealand.

This year has seen several major global vendors recall "LS-15" power cables over fire concerns. Last month, Toshiba recalled cords for a range of its notebook computers, and in August, Hewlett-Packard did the same for six million notebook and mini notebook devices.

The LS-15 model is made by Taiwanese supplier Linetek. Lenovo attributed the defect to "inconsistent combining of flame retardant compounds in plug of power cord".

The recall applies to sales between February 2011 and June 2012 inclusive. The cable may have been bundled with a notebook or distributed by itself.

Lenovo stated that a free replacement would be provided for recalled cords.

"If you have a power cord that has been recalled, please be advised that until the replacement cord arrives, you should turn off your system, remove the cord, and dispose of it in a recycle or waste bin," read the recall notice from the ACCC.

Notebooks under recall were sold through the Australian channel by distributors Ingram Micro, Synnex and Dicker Data.

Eliminating departmental friction within MSPs
By Tony Yoo
Dec 16 2014
11:54AM