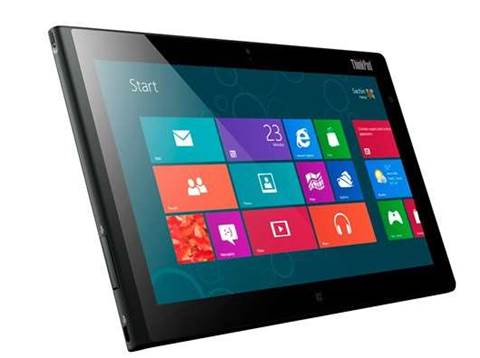 Lenovo's first Windows 8-based product, the ThinkPad tablet 2, was unveiled at a New York event early this morning.

The 10in, 9.8mm slate will run on an Intel Atom x86 chip and will launch in October alongside the debut of Microsoft’s next-gen operating system.

The tablet will come with 4G capability but is unlikely to be compatible with Australia’s LTE networks.

It will retain the stylus seen with its predecessor, and can be bundled with an optional keyboard, as well as a dock with three USB ports and an Ethernet jack. Pricing is yet to be revealed.

Lenovo this year celebrates its 20th birthday, and the seventh birthday of the ThinkPad brand since its purchase from IBM in 2005.

The ThinkPad tablet 2 joins a slew of similar devices expected to emerge when Windows 8 launches in October. HP has made no secret of its plans to launch a Windows 8 tablet, while Microsoft recently announced its own brand of Surface tablets.

The decision rang alarm bells throughout the PC industry, with Taiwan's Acer publicly questioning its ongoing loyalty to the Windows platform if Microsoft were to begin competing with it on hardware.

Lenovo also debuted a new ultrabook at the New York event - the ThinkPad Carbon X1. The 14in ultrabook is built of carbon fibre and runs on Windows 7 but is Windows 8 ready. It will retail for $US1299 and is available from US shelves now.

Lenovo Australia did not provide local pricing or availability for the two products by the time of publication.

"This is the tablet everyone is waiting for," Lenovo’s ThinkPad boss Dilip Bhatia told attending media, as reported by the ABC.

He emphasised that the ThinkPad Tablet and Microsoft's Surface were aimed at different markets, while affirming that Lenovo remained committed to its partnership with the software giant.

"Microsoft is a strategic partner for us. The Surface has brought more excitement to the marketplace. The ThinkPad tablet is focused after the business individual; the Surface is more geared towards the consumer offering," he said.