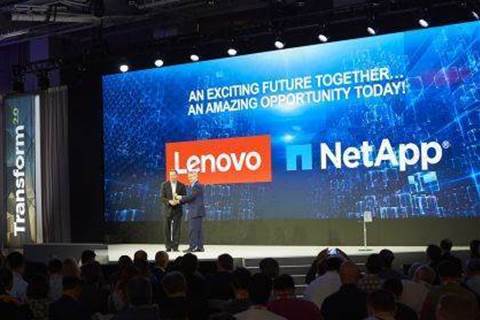 Lenovo has announced a new strategic partnership with NetApp, which will see Lenovo integrating NetApp's hybrid cloud data management technology into the largest storage portfolio launch in the company's history.

Released under the ThinkSystem banner, the new range will comprise ten flash storage platforms, featuring NetApp's data management technology but manufactured and distributed by Lenovo. All of the platforms will also make use of Lenovo's XClarity controller - an excellent management console that IT Pro praised as "radically improved" over its predecessors.

In addition to the new product line, NetApp and Lenovo are opening a joint venture in Lenovo's home country of China, which will focus on research and development and go-to-market strategy specifically for the Chinese market.

The first fruits of this partnership - the ThinkSeries DE and DM ranges - are available now, targeting the entry-level and mid-range storage markets. The president of Lenovo's data centre group, Kirk Skaugen, promised that later releases would give the company full coverage of the entire storage market.

"We're the world-leader in price performance for entry SAN and fibre-channel, but we're only participating in the entry part of the market. With the ten new products... we'll be able to support 92 percent-plus of the market," he said. "The entire storage market will be accessible to Lenovo."

Lenovo is hoping to use the new range to tempt existing customers of main rivals HPE and Dell EMC to jump ship in favour of the new co-developed solution. Dell and HPE have both previously snapped up storage firms that Lenovo had existing partnerships with: namely, EMC and Nimble. Skaugen told IT Pro that the company was not worried about another competitor snapping up NetApp to bolster its storage line in a similar fashion.

"I think that's always a possibility. Of course, Lenovo could always get bought by someone as well," he said. "That's something that we look at when we build agreements very seriously, but we think we've picked the right partner."

Lenovo has also committed to maintaining its support of and partnership with Nutanix - one of NetApp's biggest competitors in the cloud data management market. Lenovo is Nutanix's fastest-growing OEM partner, and Skaugen even went as far as to commit to becoming the company's biggest OEM within the next 2 years. He stated that Lenovo would maintain strong ties with both companies, however.

"At the end of the day, when people come to us from Nutanix, they've probably already chosen Nutanix - they're just trying to figure out do they want to deploy it on Dell, or on the NX, or on Lenovo," Skauger said. "We're all about customer choice. It's very clear we have an extremely strong partnership with NetApp... Our relationship with Nutanix will be strong; NetApp's current relationships with Cisco and Fujitsu will be strong."

Eliminating departmental friction within MSPs
By Staff Writer
Sep 14 2018
10:36AM