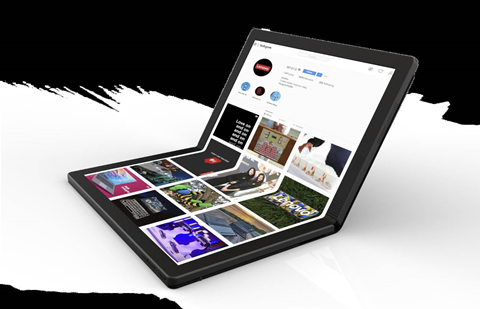 Lenovo previewed an upcoming new addition to the ThinkPad X1 family, which the company is touting as the "world's first foldable PC".

Lenovo executives showed off the device at its Accelerate 2019 partner conference in Orlando.

A name for the device was not disclosed, with the company identifying it only as a new product for the ThinkPad X1 series--which includes notebooks such as the ThinkPad X1 Carbon and X1 Extreme.

The foldable ThinkPad X1 is slated to be released in 2020, Lenovo said.

The device will have a 13.3-inch display when unfolded. The display will feature vibrant OLED technology from LG, 2K resolution and a 4:3 aspect ratio.

The foldable X1 will run Windows and use Intel processors, though specifics weren't released on which versions.

Along with opening into a tablet form factor, the device will also have a notebook mode with a digital keyboard on half of the display--and can close up for easy portability, Lenovo said.

"This is not a phone, tablet, or familiar hybrid," the company said in a news release. “This is a full-fledged laptop with a foldable screen.”

Other key capabilities will include all-day battery life and the ability to use the device with a digital pen, according to Lenovo.

The foldable X1 will offer the high degree of durability that ThinkPads are known for, as the device will be able to withstand conditions such as cold, heat, vibration, humidity, shock and altitude, Lenovo said.

The foldable ThinkPad X1 will be geared toward the most highly mobile users as well as tech enthusiasts, the company said.

Expected pricing was not disclosed.

Grabbing the hybrid cloud opportunity with Lenovo and Azure Services
By Kyle Alspach
May 14 2019
10:10AM