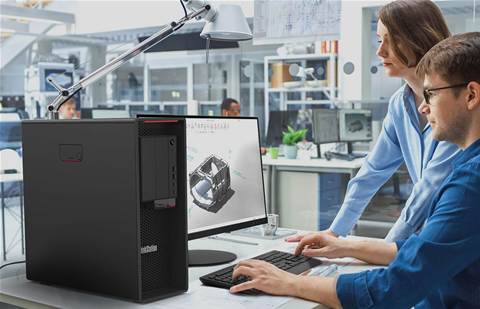 Lenovo’s ThinkStation P620, its newly announced workstation PC powered by AMD’s Threadripper CPU is set to be released in Australia by the end of October.

Lenovo claims the workstation PC is the first and only professional workstation powered by AMD’s new Ryzen Threadripper PRO processors. The 64-core workstation platform is designed to set a new industry standard, the vendor said.

AMD’s Threadripper PRO processors also offer clock speeds up to 4.0GHz, 128 lanes of PCIe 4.0 bandwidth and 8-channel memory support. Typically, the max core count that a single-CPU system can handle is 18 cores, while the highest a dual-processor system could support was 56.

The high-performance nature of the CPU brings with it greater thermal challenges, which Lenovo said it had countered with a unique air-cooled solution and a custom heat stink designed in collaboration with AMD.

“Our customers rely on us to deliver professional-grade solutions that are powerful, but nimble enough to be customised as their needs change and evolve,” said Rob Herman, GM of Lenovo’s workstation and client AI business unit.

“One of the challenges for IT departments we’ve seen is the push to try new technologies before they’ve been vetted - lacking enterprise-grade features, certifications and security, and support. We’ve worked closely with AMD, ensuring the ThinkStation P620 removes all these barriers and gives users the support they need. Built on AMD’s versatile and extremely scalable Ryzen Threadripper PRO Processor there are no limits to what can be accomplished.”

AMD said the device was ideal for power users across industries, adding that now 3D artists and game developers could have a single machine on which to create, edit and build the media. The machine has even received a nod from video game development and publishing house Epic Games.

“There are multiple stages involved when it comes to building Unreal Engine, cooking content for our games, and powering applications in media and entertainment,” said Epic Games IT engineer Pat Swanson.

“Previously, we always had to choose between either high core count or high clock speed. The Lenovo ThinkStation P620 powered by AMD’s Ryzen Threadripper PRO Processor is optimised for both aspects in a way that previous HEDT CPUs never quite were. It provides groundbreaking performance for everything from professional visualisation and simulation to compiling and building for game development, whether the team is working from home or in the office.”