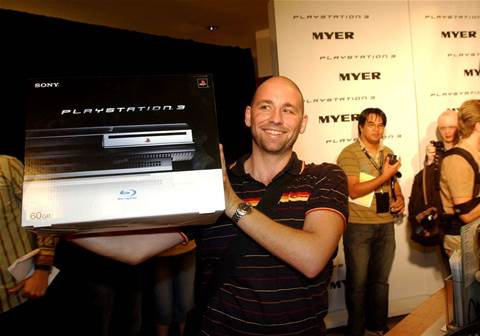 The vendor confirmed that discussions with its retail partners indicated that in hardware pre-sales alone, well over $20 million worth of products had been ordered, prior to launch.

Last night’s midnight shoppers were also keen to experience the full capability of the PS3, with many picking up HDMI cables, PS3 peripherals, Blu-ray disc movies and a number of launch game titles, including MotorStorm and Resistance: Fall of Man.

Thousands of PlayStation enthusiasts across the country waited patiently for the likes of Harvey Norman, Myer, JB Hi-Fi, EB Games and others to open their doors at midnight, in response to strong pre-order demand from consumers. With over 500 stores opening at midnight across the country, many retailers provided free entertainment to their dedicated customers, who waited patiently to pick up the $999.95 console.

The first PlayStation fan in the queue at Myer Sydney City was Danny Zarka from Pyrmont (pictured). At just past midnight, Zarka was the first to purchase his PS3 from Myer CEO, Bernie Brookes, and Michael Ephraim, managing director, Sony.

Ephraim, who was invited to the Myer Sydney City launch, said the company was thrilled to see the PS3 on sale at retail partners across Australia.

“Our retailer partners have always been very supportive of PlayStation and we are delighted that demand was so strong from consumers for the PS3 prior to launch and that many of them benefited from opening their stores at midnight,” he said.

Many consumers, who waited patiently at stores until midnight to purchase their PS3, immediately headed off home, planning a long night ahead of them to get to grips with the console.