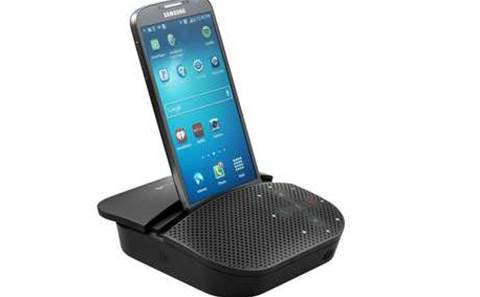 Accessory company Logitech has launched a portable speakerphone that promises high-quality conference calls with a smartphone, tablet or PC.

The Logitech Mobile Speakerphone P710e is targeted at anyone who doesn’t have access to traditional conference-room facilities, such as home workers or small teams, and might be useful to anyone who has had to crane over an iPhone on loudspeaker.

The speakerphone uses Bluetooth to connect with two devices simultaneously, and can pair with up to eight in total. It's also to plug the device into a laptop or PC which isn't Bluetooth-enabled via the USB port. It opens at the top to reveal an integrated stand, meaning callers can slot in a smartphone or tablet to keep it steady during the call. According to a Logitech spokesperson, the slot can be altered to fit any device so that it rests at the most comfortable angle. The slot doesn’t include a charger, however, so keeping the device in the stand all day to make calls will drain battery life.

Although Logitech is promising an end to "awkward" calls on loudspeaker, its speakerphone doesn't include a full keypad, so you'll still have to jab at the phone's screen to type in a phone number while it's in the stand.

However, the company does promise "enterprise-quality" audio, plus other useful features such as a noise-cancelling microphone and compatibility with Microsoft's Lync and Cisco.

The speakerphone lasts for "up to 15 hours" between charges, and can be recharged via the USB port or AC adapter. A USB cable is provided, and coils beneath the device when it's not in use.

Grow your software revenue by selling these 5 affordable, essential tools for the modern workplace
By Shona Ghosh
Oct 25 2013
12:53PM