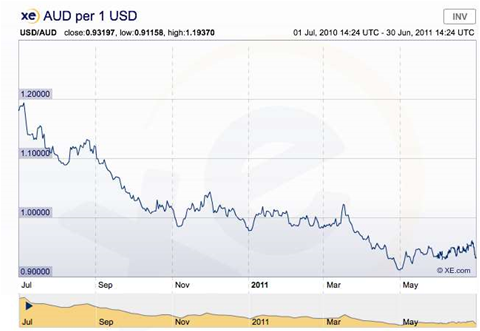 Gartner has again revised upwards its forecast for worldwide IT spending in 2011, from five per cent to 7.2 per cent in 2011.

Worldwide IT spending in US dollar terms is expected to hit US$3.7 trillion (AU$3.4 trillion) this year, according to the analyst's June quarterly forecast.

At the beginning of the year, Gartner had expected growth of just 3.5 percent in 2011, amounting to an annual spend of US$3.5 trillion.

Richard Gordon, research vice president at Gartner said it was "a bit surprising" recent events in Japan, which were expected to impact global supply chains, had not shaken the industry more.

However, he told the Wall Street Journal that once exchange rate effects were stripped out, the actual growth rate was closer to its earlier estimate of 3.5 percent.

The IT industry was still in “recovery mode”, he said.

Worldwide spending on public cloud services was expected to hit US$89 billion in 2011, roughly two percent of total spending, and it was expected to double by 2015 to US$177 billion.

Cloud computing was having an uneven effect on different components of technology spending, Gordon noted.

"For example, at about $10 billion, software as a service (SaaS) already accounts for 10 percent of enterprise applications software spending, and by 2015 this share is expected to increase to close to 15 percent and to exceed $20 billion in annual spending."

Global spending in 2011 on enterprise software was expected to grow 9.5 per cent to US$268 billion, while IT services would double in pace on 2010 rates to 6.6 per cent, representing US$846 billion.

Telecoms and related services still made up the bulk of Gartner’s analysis at US$2.14 trillion, with flat growth of 6.9 per cent.