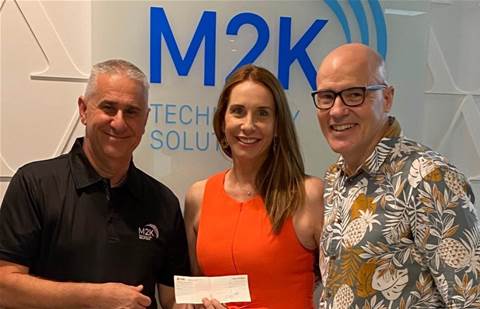 Fresh from the sale of their business to Ericom, M2K’s former owners Stephanie and Brad Ryan have launched a channel enablement consultancy based around user experience design.

The new business, Boom Creative, will use Stephanie’s past experience as communications consultant, Brad’s design expertise and a flagship M2K project to help vendors and channel players alike to hasten technology adoption.

Boom has its roots in a M2K project at a healthcare company that changed mobile carrier from Optus to Telstra. M2K’s challenge was to have staff insert a new SIM card into hundreds of mobile devices that were shared among staff and handed over to colleagues at the end of a shift.

Stephanie’s solution was to attach the new SIMs, a SIM tray pin and instructions on how to make the change onto lanyards. Lanyards were chosen as they are a staple of life in healthcare, were persistent and meant staff could tackle the SIM swap in a spare moment.

That project, and a similar one for a law firm, were both successes, and led to queries about whether M2K could offer this service mode widely.

With M2K now a part of Ericom, that door has closed. But Stephanie told CRN she and Brad “See an opportunity to support and enable the channel and vendors. We think there is a market for advice on how to maximise investment in technology by making sure it is adopted quickly and efficiently.”

Telstra will be an initial target: Stephanie said her experience as a partner to the big telco gives her insights into how Boom can assist with partner enablement.

Stephanie also heaped praise on Ericom’s Kyle Page and-Tony-Economos, telling CRN the pair were wonderfully straightforward and easy to deal with as the sale of M2K unfolded.

“Kyle and Tony have been so lovely to work with,” she said. “They hounded us and hounded us,” albeit in a good-natured way. “And just before Christmas I said to Brad ‘We should consider this.’ And here we are in early February and the deal is done.”

The process could not have been as smooth without good people being involved.

On the theme of good people, Stephanie also complimented the M2K team.

“We started with twelve people and ended up with over 50 staff,” she said. “It was a hand-picked team and we love each and every one of them.”

But she’s also excited about her and Brad’s next business venture.

“It’ll be nice to have reduced responsibility and ability to focus on what we are passionate about.”