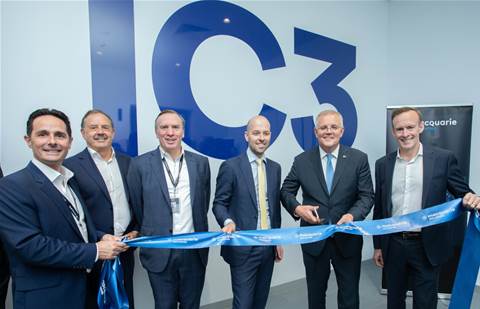 The $85 million IC3 East sovereign facility is certified for Federal Government-level SCEC Zone 3 or higher security with ISO 27001 and SOC 2.

The data centre is also part of a wider $200 million upgrade that expands the existing Macquarie Park Data Centre Campus in Sydney, with IC3 East forming Phase 1 of the upgrade from 10 megawatts to 26 megawatts, and the recently announced IC3 Super West as Phase 2 to combine for a total of 50 megawatts.

At the opening event, Australian prime minister Scott Morrison said IC3 East was an example of the type of secure, sovereign infrastructure Australia needs to bolster our cyber security posture and accelerate the digital economy.

“Increasingly, our economy and our security depend on each other. This campus is about both – a mighty $200 million data centre, Australian owned, Australian operated, one of the most trusted and certified in Australia, with a team of highly trained engineers delivering up to 50 megawatts of data storage capability.”

“The Government has consistently underscored the importance of cyber security and data sovereignty, including through the Cyber Security Strategy; decision for all government data to be stored in onshore Certified Strategic or Certified Assured data centres; and the Critical Infrastructure Bill, which formally recognised key data storage, telecommunications, and processing industries as Australian critical infrastructure.

“We’re proud to support that vision by embedding security and sovereignty into the design and operation of our Data Centre Campuses across Sydney and Canberra.”

“The world has changed quite dramatically in recent years and particularly in recent months. This has had a direct impact on the level of cybercriminal activity which is landing on Australian shores,” Tudehope said.

“We’re proud to see the Prime Minister take such a personal interest in what we know to be one of the most important issues facing the nation. Macquarie is privileged to partner with more than 42 percent of Federal Government agencies and personnel, protecting them against cyber threats through our secure, sovereign Data Centre Campuses in Sydney and Canberra.”