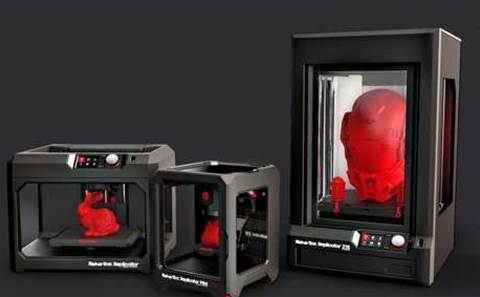 MakerBot has extended its line of Replicator 3D printers, unveiling a tiny one for home users as well as its largest model yet.

Unveiled at CES 2014, the MakerBot 3D Printing Platform aims to appeal to everyone from early adopting consumers to industrial giants - which should help the company achieve its goal of shipping one million 3D printers worldwide this year.

The MakerBot Replicator Mini is the first of the new models and is designed to bring 3D printing to the masses. However, those masses will need to have $1,375 (A$1,545) burning a hole in their pockets.

The Replicator Mini is all about simplicity. With just one button on the device itself, the Mini provides one-touch 3D printing. Users can connect to the Replicator Mini via USB cable or via Wi-Fi. There’s even a camera inside the printer, so you can watch your creation come to life and share images with friends.

The Mini uses MakerBot PLA Filament to build the projects, and this is fed through the new Smart Extruder, which is secured inside the printer using magnets, so it’s easy to remove and refill when it runs out of filament. And when it does run dry, it will automatically pause the current print job and send a message to the user requesting a refill.

The Replicator sports all the features of the Mini – Smart Extruder, on-board camera, USB and Wi-Fi connectivity - and can also print directly from USB sticks.

The Replicator has a 3.5in, full colour LCD display, with an intuitive control dial, making it easy to configure and use the printer locally, as well as remotely via the app. The Replicator retails for $2,899 and is available to order now.

The last new 3D printer is the MakerBot Replicator Z18, which is the largest 3D printer the company has ever produced. The Z18 can build models up to 12 x 12 x 18in and can even create multiple models simultaneously thanks to its large build plate. The Z18 also has all the other features found in the Replicator.

So versatile is the Z18 that MakerBot envisages that it will be able to print components used in the manufacture of future printer models.

The Z18 is aimed at high-end industrial users, but with a price point of $6,499 it could find its way into small businesses. The Z18 will be available in the spring.