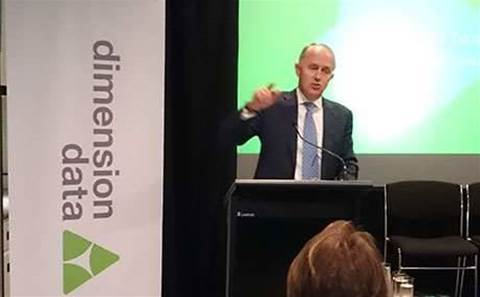 Canberra Data Centres is constructing the co-location facility in Fyshwick. The data centre, which will be DiData's 14th Managed Cloud Platform (MCP) facility, will go live from early 2015. The value of the Canberra investment was not disclosed.

Canberra Data Centres chief executive Greg Boorer told CRN that Dimension Data's MCP would be co-located with government infrastructure, with a protective wall to isolate it from the wider internet.

At the Parliament House launch event, Turnbull said: "We need to move away from the box-hugging mentality."

The member for Wentworth said that government spending on ICT represented up 30 percent of the Australian IT market, but admitted there has been "a bit of resistance to the cloud".

He credited himself and finance minister Mathias Cormann with the change in public sector IT strategy. "We mandated a cloud-first policy [for government bodies] and streamlined the data storage policy."

Turnbull said it was "remarkable" that people still assumed data was more secure in an office than in a professionally managed cloud. "It's not risk management; it's more an aversion to change."

Dimension Data's launch announcement was pipped by a competing statement from Telstra about a government-specific cloud.

On the Telstra news, Cunico said: "We don't talk about what we're going to do – we've done it."

Dimension Data talked up its IT services contract for last week's G20 in Brisbane to spruik its government sector credentials. Elizabeth Kelly, deputy secretary of the department of Prime Minister and cabinet, said that all 7,000 international delegates enjoyed a "seamless experience" of the wi-fi, kiosk, and cloud services at the event.

"It could've been been a hotbed of discontent, but it was a triumph," said Kelly.

Dimension Data's investment follows SAP's announcement last week that it was opening of its own Canberra data centre for Hana and an Institute for Digital Government.