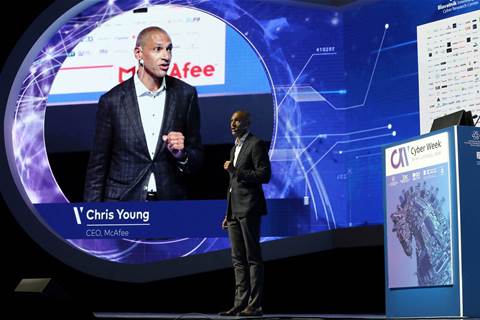 Cybersecurity firm McAfee is looking at further acquisitions after buying security provider SkyHigh Networks this year and has not ruled out going public again to widen its options, its chief executive said.

"We do have the capacity to take on more debt if we need to... but that would certainly be one of the other reasons to go public, as it changes the ability to do acquisitions. It gives us a different type of currency," CEO Christopher Young told Reuters on the sidelines of a cybersecurity conference.

Intel, which paid $7.7 billion for California-based McAfee in 2011, last year spun off 51 percent to private equity fund TPG Capital at a US$4.2 billion enterprise value.

McAfee has $2.6 billion in annual revenue, is very profitable and has increased its valuation since the spin-off, Young said, although he declined to provide details.

After buying SkyHigh Networks for an undisclosed sum, McAfee bought Canadian VPN provider TunnelBear to add to its consumer business, which now provides mobile security to more than 300 million devices.

Young said there are a number of companies McAfee looks at as potential purchases, adding it has cash available.

"Going public is certainly something that's a possibility. We don't have a set time frame. Our focus is on building the business," he added.

Reuters reported last year that McAfee was raising US$4.25 billion in loans to finance a dividend and refinance debt, while sources familiar with the deal had said McAfee was preparing for an initial public offering.

Young said cloud protection is a big part of the company's strategy, while enterprises are beginning to add mobile security to their portfolios.

"Enterprises are a little bit behind where consumers are for mobile security today but it's certainly something that's becoming of greater interest," he said.