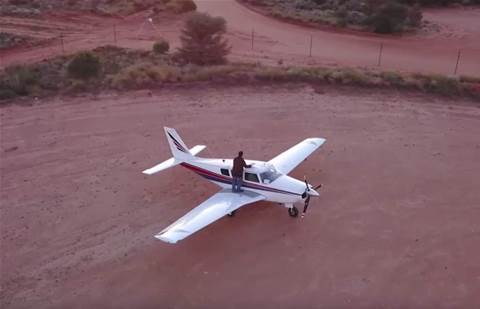 The Marcsman Technology team taxiing on a remote runway.

Not many resellers have done jobs that required sleeping under the wing of a light plane. Or dodging camels on the runway while trying to land one.

But they’re just some of the adventures enjoyed by the crew at Marcsman Technology, a Perth-based reseller that has its own light plane and specialises in flying it to do work in remote communities.

The company’s managing director Marc French told CRN the high-flying reseller took off when he worked for Kinetic IT and was engaged on a project that involved work in remote communities and saw a need for on-the-ground support.

French had a pilot’s licence and felt he could service the need for on-site support in the bush.

His met his co-pilot in business and Marcsman colleague Mo Farid while the latter was earning his own pilot’s licence.

Marcsman then applied for a tender issued by the Western Australian Department of Education to support schools around the state. And to their surprise, won one of 20 tranches of work and found itself supporting remote schools.

A typical week for the company now consists of some of the company’s six team members – all of whom have different technical specialties - flying off to remote communities to take on a few jobs.

Preparation for what French and Farid call each new “mission” starts weeks in advance. First they must determine if Marcsman’s own part-owned plane can do the job, or if it needs to rent another.

Next comes figuring out weight allowances so they can determine what can be flown, and what must be posted or trucked in advance.

With postal services nowhere near daily, and journey times for personnel who come by road considerable, it adds up to a lot of lead time.

Planning refuelling stops is also crucial. And so is planning where to sleep.

“We pre-arrange to get a room in one of the teacher’s houses or a roadhouse,” French told CRN. Once, he had to sleep under the wing of his plane.

The resulting itineraries can see the company touch down, do a job, then fly again to another jo the same day.

The work is varied. Farid said that education jobs could involve replacing servers, consolidating infrastructure or even conducting professional development of local teachers and administrative staff. Farid and French have Masters degrees in finance and management, so can also pass on those skills as they travel.

A critical payload on most missions is a VR headset, because it inevitably delights kids wherever they travel. “Indigenous kids love the experience,” French said. And Marcsman’s people love being able to share the possibilities of technology.

Flying from job to job and planning missions sounds like a lot of fun, but Marcsman is also a serious business. The company realised that communities that host a school also have a Police station and/or healthcare clinic. So French contacted the larger IT services provider contracted to support those sites and informs them when Marcsman will be in town. The result is some sub-contracted work.

French and Farid have even managed to help the aviation industry, by offering students the chance to fly with them and rack up the hours needed to qualify for a licence.

The pair provided CRN with one of the most joyous interviews your correspondent can recall: both loved to talk about their work, their business and the opportunities it brings them every week.

But the pair also have the steel of determined entrepreneurs: at the time of our interview they awaited the outcome of a state government tender that would expand the company significantly.

And French sounded determined to win it.

“We did a case study for the tender and we were 77 percent cheaper than driving or charter,” he told CRN.

And clearly also better value, in many, many ways!