Meet the winners of the 2017 CRN Impact Awards! 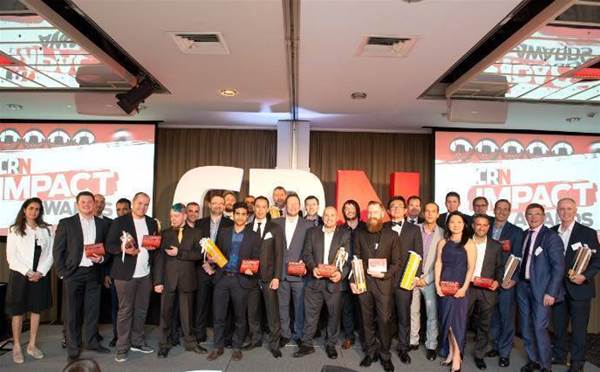 The winners of the inaugural CRN Impact Awards were revealed on Thursday night in Sydney, recognising IT providers for leading technology projects that delivered real benefits for Australian customers.

The awards followed months of nominations and judging by the CRN editorial team and a group of highly respected industry judges and were announced in Manly, Sydney as part of the annual CRN Pipeline conference. The full list of winners and finalists can be found on our Impact Awards hub and expressions of interest have now opened for the 2018 CRN Impact Awards.

Melbourne-based Vibrato took home the most highly contended category in the awards, Digital Transformation, for deploying a big data and analytics platform on Amazon Web Services to deliver insights for one of the biggest energy companies in the country, CitiPower and Powercor

The Impact Awards judges were blown away by the truly transformative project that combined smart grid technology with cloud data analytics.

Vibrato was joined by two Highly Commended projects in the tightly fought category, with judges praising both Mexia's project with Bendigo Health as well as Versent's work with Service NSW.

Another particularly competitive category was Workforce Empowerment, which recognised projects promoting flexible working and empowering mobile workforces. The winner in this category, Comunet, worked with one of Australia’s largest fruit and vegetable producers on a harvest management solution to digitise the fruit picking process.

Highly Commended in this category was Tquila ANZ, which shifted client Tyrrells Property Inspections from a paper-based process to a mobile app built on Salesforce. Telstra partner Calibre One's work with Halkitis scored the company a Commended nod.

The judges were divided over a pair of projects in the Trusted Systems category, and the two entries could not have been more different. The winner, UXC Connect, was a landmark multimillion-dollar security project to segregate and protect Melbourne Water's IT and industrial networks. Highly Commended went to Adelaide-based reseller Geek, whose Datto business continuity solution saved Civil Contractors Federation SA when it was struck by Cryptolocker.

There was no doubt in the judges' minds which project deserved to win the Customer Experience category. DiUS used technology from Amazon Web Services and Google to create Australia's first virtual reality property app for REA Group, the company behind realestate.com.au.

The Working Together category sought to recognise projects where multiple partners came together and collaborated to deliver a customer solution. This winners were Cloud Plus and Surety IT, who partnered on a five-year managed ICT contract for John Deere dealer Chesterfield Australia, including private IP network, managed firewall, hosting, backup and disaster recovery.

A game-changing technology breakthrough between b2cloud and Vodafone Foundation received a Highly Commended, for creating a "smartphone supercomputer" that used distributed computing power for cancer research at The Garvan Institute.

There has been a trend of IT service providers building their own intellectual property, which was the motivation behind the category for IP, Product & Platform Innovation. The winner was Bryte Systems for BryteFlow – a faster way to build cloud data lakes, run complex queries and big data analysis workloads on AWS' Amazon S3, EMR and Redshift with minimal impact on operational performance.

Startup NetCrypt came away with a Commended nod in the IP category for its data security product, which protect against data loss or theft from insider actors, ransomware and hacking and has attracted an early channel partner in the form of publicly listed IT provider BigAir Group.

The clear winner in the Modernising infrastructure (Enterprise) category was Perth-headquartered Kinetic IT, whose multi-year project to upgrade IT across nearly 800 schools in Western Australian could save the department $31 million annually in support.

A project by VoIP for client Sydney Local Health Districts received a Commended in this category, thanks in part to navigating the highly regulated healthcare sector.

While cloud projects received a fair share of the limelight at the CRN Impact Awards, it was a hardware deployment that grabbed the judges' attention in the Modernising infrastructure (Mid-range) category.

Trident Computer Services "almost twisted [the client's] arm off" to get Vale Australia to consider reversing out of the public cloud to a hyperconvered system from HPE Simplivity. Good job they did, because the switch cut the client's opex by 35 percent per month and delivered ROI in four and a half months.

Highly Commended went to base2Services for migrating music streaming service Tuned Global from physical hardware and IBM Softlayer to AWS, while Venn IT Solution was Commended for its backup project with Core Logic (RP Data).

In the Optimising investments (Mid-range) category, Microsoft partner OBT was celebrated for its workplace transformation for Eureka Funds Management. OBT empowered the client's staff to communicate and work securely from anywhere giving them a choice of device, location and form factor.

Are you doing any cool projects this year? Fill out an online expression of interest form and we will inform you when we open entries for the 2018 CRN Impact Awards. The form is quick and easy.