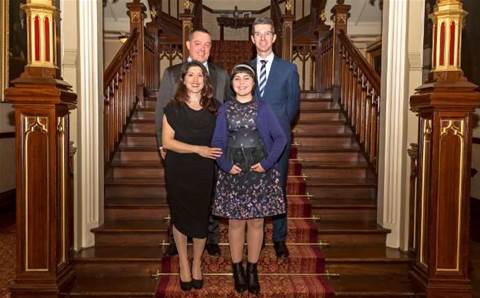 Business SMS provider MessageMedia has helped raise $25,000 for leukaemia research with a donation to the World’s Greatest Shave campaign.

The donation was made by founder Grant Rule to 13-year-old April Saya, who is raising money for her younger brother Dante’s second leukaemia treatment.

“One of our clients, Australian Fleet Sales’ IT manager Cameron Jessep, reached out to us in March with an email,” said Ruchotzke. “He is a scout leader, and one of his scouts’ younger brother has leukaemia so she is fundraising for his treatment. Cameron said if she raised $1000 he’d shave his head, but when they got to $2000 he said, ‘Let’s see how far it can go.’

“I sent an email around the office hoping to collect a couple hundred dollars. The owner, Grant Rule, was so touched reading the email, he decided to make a significant contribution.”

MessageMedia has a charitable program where staff can nominate an organisation to make a donation to on behalf of the company. So far, it has donated to the 20th Man Fund for underprivileged youth and Amaze (formerly Autism Victoria).

“When we make a donation, it can’t just be for the sake of giving money,” said Ruchotzke. “It has to be something that will actually make a change.

“It makes you feel good because we all work very hard to make a profitable company, but it’s nice to know profits aren’t just going toward the company. It’s a privilege to be in a position to contribute back to those in need.”

So far, April has raised $31,780 for the World’s Greatest Shave Campaign, which raises money for the Leukaemia foundation. If you would like to donate to April, click here.

MessageMedia provides bulk SMS solutions to business with over 15,000 customers in Australia, New Zealand and US.