Michael Dell interview: We're quite ahead of HPE 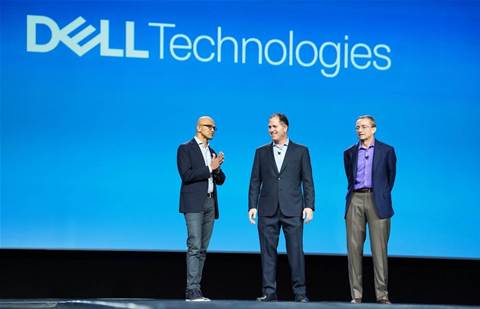 “We’ll let our share speak for itself,” said Dell in an interview with CRN when asked how the Dell Technologies Cloud stacks up against HPE GreenLake. “All these things are built on software and hardware infrastructure. We’re quite ahead [of HPE]. … We’re going to keep focused on growing our share, and we’re certainly doing a full embrace of on-demand and flexible offerings.”

The US$91 billion infrastructure giant is the worldwide market-share leader in storage, servers and hyper-converged infrastructure, while virtualization superstar VMware also falls under the Dell Technologies family of brands.

Dell also speaks to CRN about his thoughts on a potential economic recession in 2020, how U.S. and China tariffs are affecting Dell, and the company’s Kubernetes push with VMware to become the worldwide market leader.

“We’re putting Kubernetes right into vSphere,” said Dell. “The Dell Technologies Cloud and our infrastructure solutions are all very tightly integrated together with VMware based on the VMware Cloud Foundation, what we’re doing with the Pivotal Container Service—all of that rides on vSphere.” He added that Kubernetes integration with vSphere will come “very, very soon”.

Are you losing any sleep due to any disruption with the current U.S. and China tariffs?

We’d certainly like to see an improvement to the situation, if I can put it that way. Look, if you look at the last 100 years, there’s no question that global trade and free global trade has been an enormous contributor to the global economy. We hope that the discussions that are going on even this week are successful and that there’s less trade tension in the future. However, we certainly will work around whatever environment we find ourselves in.

Do you see the possibility of a potential economic recession in 2020? What’s your economic outlook for next year?

It still looks quite favorable. We’re still in the early stages of a technology-led investment cycle in digital transformation. If you think about an individual company, let’s say there is some economic slowdown—in some countries in the world we’re seeing that. So does that mean that you can hit pause on the digital transformation? No, it doesn’t. What I’m seeing is at the overall company level, at the CEO and board level, these companies understand that digital transformation and reimagining their businesses with all this data using software and AI is a must for success. There will be economic cycles, but that doesn’t mean you can stop evolving your business.

How does the Dell Technologies Cloud stack up against HPE’s GreenLake?

We’ll let our share speak for itself. All these things are built on software and hardware infrastructure. We’re quite ahead [of HPE]. If you look at hyper-converged, I’m not exactly sure how much bigger we are than HPE [but it’s around] eight or 10 times bigger or something like that. In storage, we’re bigger than the No. 2, No. 3 and No. 4 [market-share leaders] all combined together. We’re going to keep focused on growing our share and we’re certainly doing a full embrace of on-demand and flexible offerings. Dell Financial Services [DFS] has been super successful, especially for channel partners. DFS originations in the first half of 2019 grew nine percent year over year. The partners who have financing with us have typically grown at twice the rate versus partners who don’t finance with DFS. But we’re also going to make it easier with metering and monitoring built into the products and an increasingly big embrace of on-demand.

Why do you think the Dell Technologies Cloud is the best hybrid cloud platform in the market?

This is about putting all the pieces of Dell Technologies [which includes Dell, Dell EMC, VMware, Pivotal Software, SecureWorks, RSA, Boomi and VirtuStream] together. Certainly, we have the pieces. If you look at any aspect of hardware or software infrastructure, we’re No. 1. We’re No. 1 in public and private cloud IT infrastructure. No. 1 in enterprise storage. No. 1 in storage software. No. 1 in virtualization. No. 1 in all-flash arrays and hyper-converged systems. We’re No. 1 in server units and revenue. The Dell Technologies Cloud brings together Dell EMC’s hardware offerings like VxRail and our validated high-performance arrays with the VMware Cloud Foundation software stack. We have these new validated designs. It’s sort of the easy button for Data Center as a Service. We starting to roll that out. It further enhances our on-demand offerings and we’ll have more to say about that in the coming weeks. It also fully embraces everything that VMware is doing with vSphere and putting Kubernetes right into vSphere with new PKS and container capabilities.

VMware has invested heavily this year in Kubernetes to take the market by storm. Can you talk about Dell Technologies’ Kubernetes strategy?

First of all, we’re putting Kubernetes right into vSphere. We showed that on stage at VMworld and gave demos of it—that’s coming very very soon to the 600,000 vSphere customers that we have around the world. It’s incredibly powerful to be able to manage virtual machines and Kubernetes clusters all from the same console and framework that all these customers are already used to. It’s a big endorsement from VMware of Kubernetes and certainly the acquisition of Heptio and now the acquisition of Pivotal, which will also close pretty soon—that just strengthens our capability. We’ve had some of the new hires. We have two of the three original creators of Kubernetes working at VMware. The Dell Technologies Cloud and our infrastructure solutions are all very tightly integrated together with VMware based on the VMware Cloud Foundation, what we’re doing with the Pivotal Container Service—all of that rides on vSphere.

Dell Technologies, specifically VMware, has been on a huge acquisition spree this year. Can you talk about Dell’s networking strategy with purchases like Avi Networks and Veriflow?

If you step back, across Dell Technologies we’ve done about 40 acquisitions in the last four years. We’re on a pretty strong pace and we’ve had a great track record. VMware revenues for the second quarter were up 12 percent year over year. Networking is a big focus. We believe the future of networking is software-defined and with NSX and all the enhancements that we keep adding with VeloCloud, with Avi Networks, with Veriflow—we’re just enhancing the capability to separate the hardware from the software in the network. That drives enormous amounts of automation and increases the security inside the network and it’s resonating super well. NSX is outgrowing all of VMware by a substantial amount.

What are your thoughts on IBM and Red Hat as a new competitor to Dell?

If you look at some of the capabilities that we have with VMware Cloud Foundation and being able to move workloads across any environment, what’s really important today is to have a developer-friendly location-agnostic platform. When you look at the number of workloads that run in VMware—whether it’s in the private cloud, hybrid cloud, public clouds with now all of the major public clouds and 4,000 partners or our tremendous growth in edge computing—sure, there are other companies that would claim to be playing in that space, but nobody has the multi-cloud capabilities that we have with VMware.

Dell recently created a new Chief Digital Officer role for Dell veteran Jennifer Fletch. How are you hoping to change your company internally?

What we are doing inside our company is what many of our customers are doing, which is reimagining the company in the digital age. We have incredible amounts of data. We have a fantastic partner and customer relationships. We have products that are becoming intelligent and Jen is bringing all of this together. She’s been with the company for quite some time. It’s a new role for her but one that she’s very much ready for. This is all about accelerating our digital journey which our customers are trying to do as well.

Fletch said she wants to retool Dell Technologies as almost a software company. How will that accelerate Dell?

When you have new opportunities and you have tons of data, how quickly can you—using software, AI and machine learning—turn those into code so you can take action on those so you can get results and outcomes you want. This is what we are doing inside our company. It’s what we’re enabling with Pivotal and Kubernetes and VMware. We are our own best customer for all these tools and technologies that we’ve created inside the company. Our products are becoming intelligent and certainly more software- driven and software-defined.

How do you balance work and home life? Do you work 365 days a year?

No, I don’t for 365 days a year. Of course not. … If you want to do something for a long time, you have to establish a balance. What I found is that there is a diminishing return to the number of hours worked in a week. After a certain point, you’re not as effective and you’re not as happy. There’s other things of course, like you want to be with your family and have time to sleep and exercise. Those are incredibly important. If you’re going to go a long time—and I’ve been doing this for three and a half decades—you have to establish that balance. I think I do that reasonably well. You can always improve a little bit here and there. I’m careful in how I invest my time because that’s the only thing we can’t make more of. Fortunately, we have an incredible team. We’d be nothing without the team we have. Not only the team at Dell Technologies with about 160,000 team members around the world, but our team of partners that help make all this work. It’s always a balance. Each person has to find the right balance for themselves.