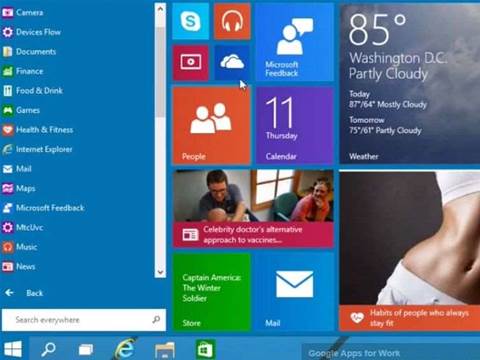 Microsoft has released another new preview of Windows 10 (Build 9879), adding a selection of new features to the OS but warning of some notable bugs.

Here's our round-up of what to look for in the latest Windows 10 pre-release and some more details on the bugs that you may experience if you install the experimental OS on your PC.

Perhaps the most interesting of the new toys is a new selection of three-finger gestures for devices with precision touchpads. Swiping up with three fingers will now open Task View, which lets you easily flick between open Windows or open a new virtual desktop. Flicking down will show the desktop, flicking to the left or right will switch between previous apps, while tapping with three fingers will open search.

Microsoft is also revamping the way OneDrive works in Windows 10. In current versions of Windows 8.1 and 10, OneDrive only retains copies of certain files on your PC (unless you tell it to synchronise everything), but it seems that system has left some users baffled.

"In Windows 8.1, we use placeholders on your PC to represent files you have stored in OneDrive," explains Microsoft's engineering general manager, Gabe Aul, in a Windows blog post. "People had to learn the difference between what files were 'available online' (placeholders) versus what was 'available offline' and physically on your PC.

"We heard a lot of feedback around this behaviour. For example, people would expect that any files they see in File Explorer would be available offline by default. Then they would hop onto a flight (or go someplace without connectivity) and try to access a file they thought was on their PC and it wasn’t available because it was just a placeholder. It didn’t feel like sync was as reliable as it needed to be."

Instead, OneDrive will now use what Microsoft is calling "selective sync", allowing the user to define exactly which files or folders they want to have offline access to on their PC. To further ease confusion, File Explorer will now be the sole means of accessing OneDrive, with the modern OneDrive app seemingly being retired.

3. New icon for the charms

Microsoft continues to grapple with the troublesome charms. Feedback from previous builds suggested it was "too hard to find the charms and full screen button in modern apps", and so Microsoft has replaced the three dots icon that was being used for the charms with a "hamburger-style" icon - three horizontal lines.

It's difficult to see how this makes the situation much clearer, and we wouldn't be surprised to see Microsoft drop the little-used charms altogether by the time Windows 10 finally ships.

Elsewhere, Microsoft is letting you hide two of the previously mandatory icons that appeared on the taskbar: Task View and search. You can right click on the taskbar and hide either or both of the icons.

Windows 10 remains beta software, and although the past two builds have been remarkably stable in our experience, Microsoft warns that some more serious bugs have crept into this release.

The biggest potential flaw is that some users may see "disk growth of 20GB+ due to driver install duplication". On systems without sufficient free disk space to cope with this, this latest build may refuse to install and roll back to a previous build.

Users may also experience a black screen when they attempt to log in to or unlock their PC, the only way to escape from which is to perform a hard reboot.

Skype calls will disconnect and Music will stop playing if those apps are minimised, and tester may be unable to connect to Distributed File System network locations.

As with any pre-release software, avoid installing Windows 10 on any mission-critical PC.