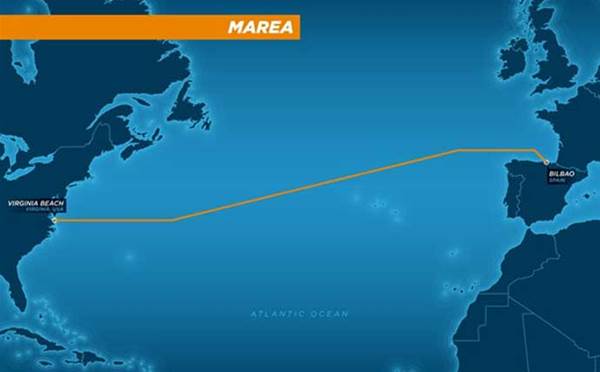 The 6600km long subsea cable connecting Spain to the east coast of the US is ready for business.

Called Marea, after the Spanish word for “tide”, the subsea cable is a joint project between Microsoft, Facebook, and Telxius. The trio began work on the cable in August last year and the speed of completion is said to be three times faster than typical subsea cable work.

Lying more than 17,000ft below the surface, Microsoft called Marea “the most technologically advanced subsea cable to cross the Atlantic Ocean”. It's also the first cable to connect Virginia and Spain, landing in Virginia Beach and Bilbao.

It runs along a route just south of existing transatlantic cable systems and, because it's physically separate from the other cables in the area, the amount of traffic flowing through it is reduced, giving it the potential to be more reliable.

It also features what's known as an “open” design meaning it can upgraded in response to growing bandwidth use globally without too much extra work.

The cable stretches more than 6600km and weighs 4.65 million kilograms. Microsoft likens this to the weight of 34 blue whales.

Marea can transmit up to 160 terabits of data per second, which is 16 million times faster than the average home internet connection. To put this into perspective, this makes Marea capable of streaming 71 million HD videos simultaneously.

“In a time when global economies are deepening their reliance on cloud technologies, and both private and public sectors are embracing the opportunities for growth and improvement through digital transformation, we're energised by the impact the Marea subsea cable will have on the advancement of cloud computing and digital services,” said Suresh Kumar, Microsoft corporate vice president for cloud infrastructure and operations.