Microsoft and Samsung put aside rivalry for Android push 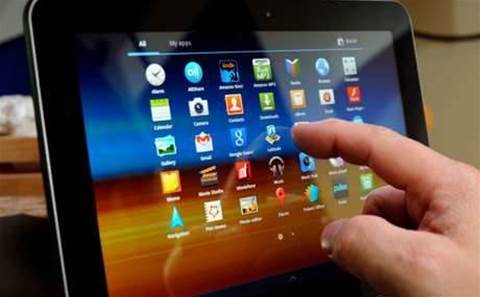 Microsoft and Samsung, known for their longstanding rivalry in the mobile market, trumpeted an extended collaboration Monday to provide pre-installed productivity services for consumers with Android devices.

Under the two technology giants' partnership, Samsung will pre-install Microsoft services and apps -- including OneNote, OneDrive and Skype -- on its new Galaxy S6 and Galaxy S6 Edge smartphone devices, as well as on select Samsung Android tablets.

The Washington-based company's latest move in a string of efforts to promote its cloud-based services across a bevy of platforms opens up further opportunities for Microsoft partners to offer mobile-security and device-management services.

Samsung and Microsoft first announced the partnership in the beginning of March, when South Korea-based Samsung announced it would pre-install OneNote, OneDrive and Skype in a special "Microsoft Apps" folder on its new Galaxy S6 smartphone devices, slated for release April 10.

The companies additionally revealed Monday that Samsung will begin pre-installing an array of Microsoft's services -- including Word, Excel, PowerPoint, OneDrive, OneNote and Skype -- on select Android tablets in the first half of 2015.

As Microsoft continues to push its cloud productivity services on other platforms, partners said they think it is wise for the company to reach as many consumers as possible, even if those clients are Android or iOS users.

Microsoft and Samsung's partnership is a turnaround from their longstanding rivalry in the mobile space. In 2014, the Android platform, which is used primarily on Samsung devices, took 81.5 percent of the OS market share, while Microsoft's Windows Phone took a mere sliver of that space at 2.7 percent, according to research firm IDC.

The two companies butted heads over patent royalties last year after Microsoft accused Samsung of violating the terms of a licensing agreement by refusing to make royalty payments after Microsoft acquired Nokia's handset business in 2013. The dispute was settled in February, according to Microsoft.

While Microsoft's Windows OS may get a boost with the release of its new Windows 10 platform later in the year, the company has driven its Outlook services and app portfolio across other systems in the past few months, including upgrading its Outlook versions on the iOS and Android platforms.

On Monday, Peggy Johnson, executive vice president of business development at Microsoft, wrote in a blog post that the company would also expand its strategic agreements with Dell and 10 other unspecified hardware partners to pre-install cloud services on Android devices coming to market later in the year.

"These deals demonstrate how we are working with hardware partners in new ways to deliver rich experiences through their scale," said Johnson in the post. "This is a big step forward for our cross-platform and cross-device services strategy, which will bring an array of Microsoft services to every person on every device."