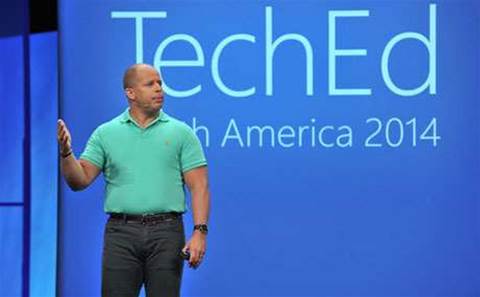 Microsoft announced a number of enterprise features for its Azure cloud service at its TechEd conference today that edge the company closer to those offered by industry leader Amazon Web Services.

In most cases, the services Microsoft announced at TechEd US are at least 12-18 months behind its main rival.

The most compelling of the features slated for release are targeted at IT professionals that have already bought into a Microsoft legacy - allowing for some means to differentiate Azure from the rapid release of developer-centric features by AWS.

Among those that mimic AWS, Microsoft announced the general availability of ExpressRoute, its response to Direct Connect, a service introduced by Amazon Web Services in August 2011.

ExpressRoute allows connectivity and hosting partners to offer an MPLS connection into the Azure cloud from on-premise data centres.

Microsoft had previously offered customers VPN access to their virtual machines without traversing the public internet. ExpressRoute allows for a single logical connection between a customer premise to all services, including servers, databases, and applications.

It also offers a 99.9 percent connectivity uptime by connecting customers with redundant pairs.

Microsoft will announce Equinix as a data centre partner for the ExpressRoute service, with AT&T, Verizon and BT as telco partners.

The company has promised that 13 more territories will offer the service by the end of the year.

Representatives said no agreements have been struck in Australia yet - where Azure instances are under construction in Sydney and Melbourne - despite sister publication iTnews sighting traffic flowing between Azure data centres across the globe including what appeared to be facilities in Sydney, Melbourne and Perth whilst touring an Azure NOC.

Like ExpressRoute, Microsoft’s import/export function for Azure begins in the United States before rolling out to Australia, and again mimics a service that has been available on AWS for some three years.

Microsoft will also announce two new instance sizes to compete with AWS’ largest - the A8 offers eight cores and 56GB of RAM, the A9 16 cores at 112GB of RAM, both connected via Infiniband at 40 Gbps.

Audiences at TechEd will also likely be reminded that last month, Microsoft announced the general availability of an autoscaling function for compute and storage queues on Azure, a feature that has been available on AWS since 2010 and in preview on Azure since July last year.

Microsoft engineers told iTnews during a preview of the announcements that Azure Files was a response to the most requested service from existing customers.

It provides Windows administrators an easier means of mounting an on-premise shared file store to the Azure cloud, with access to the hosted file service available via both standard Windows file APIs or a REST API.

“We gave this a lot of thought and it was a tough conversation,” said Corey Sanders, group program manager for Windows Azure, while introducing the product.

“There are a huge amount of existing apps using 2.1. To get the full range of application support, including Linux, we felt this was the right decision.”

Several of the other bridges Microsoft is building between Windows and Azure aren’t quite as cognisant of customer legacy.

Microsoft will announce new features for its Azure Active Directory service, which attempts to extend existing Active Directory identities into the Azure cloud and use them for single sign-on access to corporate SaaS apps.

A premium version of Azure Active Directory has been available to large enterprise customers since early April, and will soon be coupled with a new migration tool (Active Directory Connect replaces the existing DirSync tool), and a cloud discovery service that could be likened to those available from Sky High Software.

Unlike the decision made for Azure Files compatability, this service requires the on-prem Active Directory service to be running one of the last two server operating systems (Windows Server 2012 R2 or Windows Server 2008).

Brett Winterford visited Redmond, WA as a guest of Microsoft.

Grabbing the hybrid cloud opportunity with Lenovo and Azure Services
By Brett Winterford
May 13 2014
9:49AM