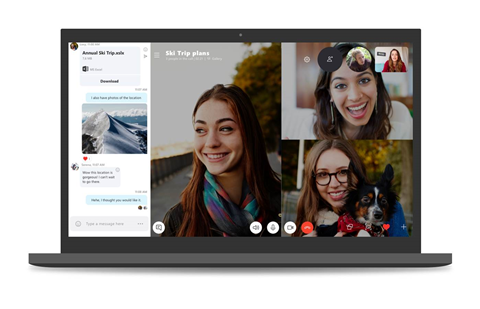 Microsoft has backtracked on its decision to discontinue support for Skype 7, or "Skype classic", following feedback from customers, revealing it would instead extend support for “some time”.

The software giant announced in a blog post its plan for Skype 8.0 for desktop to replace Skype classic on 16 July, as support for the latter would be discontinued after 1 September.

“As we roll out improvements, there comes a time when we must shut down older services and application versions,” the blog post read.

“This is done to ensure that all customers have the best possible Skype experience, and that there are no quality or reliability issues resulting from old technology and new technology interoperating.”

The post was met with a number of complaints from users taking issue with changes like the interface overhaul and other visual tweaks, as well as the all-in-one approach that does not include simultaneous chat window support.

One commenter said: "The new version is NOT nice to work with, you cannot change the layout to a nice little one, it stays big!"

Another said: "New Skype is not meeting peoples needs, and as so many have issues with it, and as you clearly can not address all of them in time. If you cut off the previous version by 1 September, I know you are going to lose a lot of users. I am already having to look for an alternative as I simply cant use new Skype as it doesn't support my needs like the old one did."

The comments prompted a Skype team member to respond, noting the feedback would be taken on board.

“Thanks for all your comments - we are listening. We are working to bring all the features you've asked for into Skype 8," a forum moderator wrote, in addition to updating the original post.

"Based on customer feedback, we are extending support for Skype 7 (Skype classic) for some time. Our customers can continue to use Skype classic until then."

“Everything about this new version, from the underlying performance improvements to the usability enhancements, is designed to keep you connected to the people who matter most,” Microsoft said.

“We built Skype version 8.0 based on feedback from our community—adding exciting new features while ensuring it’s simple to use with the same familiar interface of Skype version 7.0.”

Cloud application revenue made easy
By Nico Arboleda
Aug 8 2018
6:00AM