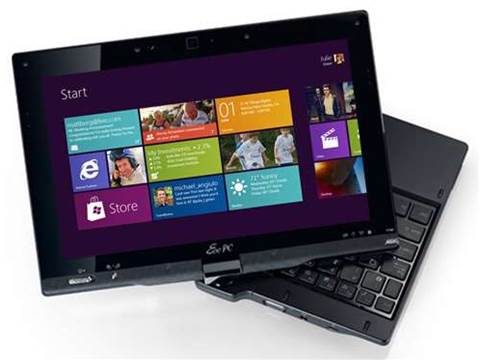 When it comes to technology perception is everything.

One can attribute part of the success of the smartphone to the fact most lack an upfront cost - instead the quite significant pricetag is hidden within one’s monthly phone bill. It makes choosing a smartphone a case of picking the ‘best’ one, rather than agonising over relative price differences.

But when it comes to other sectors of the technology industry, price is crucial. One of the biggest disappointments with the first generation of ultrabooks has been the cost, which keeps them from being the straight laptop replacements that they are intended to be.

But perhaps the biggest area where price sensitivity plays a part is in the tablet space.

According to the Taipei Computer Association, price is going to be even more of a sticking point for manufacturers of Windows 8 tablets and laptops. Not only does the inclusion of touch screen hardware raise the cost, but OEMs will also be slugged $US90-$100 for Windows as well.

The fear is that this will push the price of Windows 8 devices higher than the equivalent products from Apple and manufacturers using Android.

Until fairly recently we’ve seen Android tablet makers use Apple’s pricing as their guideline. You could almost guarantee that a 16GB WiFi tablet would launch at $579, the same price as an equivalent iPad, despite Apple traditionally being the expensive kid on the technology block.

The problem was that many of these tablets just weren't on equal footing to the iPad. If manufacturers were to drop the price by a noticeable amount they could be seen as good budget offerings, especially for those who don’t know if they’ll be prolific tableteers, but at $579 very few products could hold their own against the iPad.

This is in a situation where the operating system is effectively free – Apple makes money from hardware and App sales, while Google makes money off Android from both Apps and having handsets contribute to its great pool of analytical data.

Despite the advent of the Windows App store and other potential money making ventures, Microsoft’s core business is selling operating systems, meaning that it needs that chunk of cash that comes hawking OEM copies of Windows to manufacturers.

Windows 8’s major market is tablets (and to a lesser degree touch-enabled ultrabooks). But it is going to be an uphill slog towards acceptance if these tablets end up $100 or more expensive than the equivalent Android or iOS offerings.

If even the manufacturers are lamenting the price premium that comes from building such devices, it doesn’t bode well for consumers.