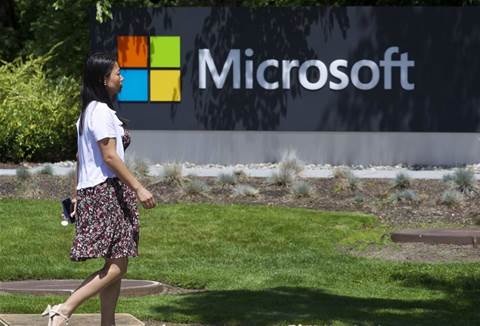 Microsoft appears to be seeing more tailwinds than headwinds from the COVID-19 crisis, with all of its major segments seeing growth amid the widespread shift to remote work.

Microsoft said that surging demand for the Teams collaboration app, Azure cloud platform and Windows Virtual Desktop helped to drive US$35.02 billion in revenue for its fiscal third quarter, ended March 31, beating Wall Street consensus estimates of US$33.66 billion. That was up 14.6 percent from US$30.57 billion in revenue during the same quarter a year ago.

The arrival of the COVID-19 coronavirus pandemic has led countless businesses to transition to work-from-home since March.

The move to remote work has led to an "orders of magnitude increase" in usage of Teams and other services such as Windows Virtual Desktop (WVD), Nadella said.

WVD--which runs on Azure and aims to simplify the deployment of virtual desktops--saw its usage triple during the latest quarter, Nadella said.

Microsoft's productivity and business processes segment, which includes Office 365 and Teams, reached US$11.74 billion in revenue during the latest quarter, up 14.6 percent from US$10.24 billion the year before. Office 365 commercial revenue rose 25 percent, while Dynamics 365 revenue climbed 47 percent.

In terms of Microsoft's cloud infrastructure, “now more than ever, organizations are relying on Azure to stay up and running--driving increased usage,” Nadella said.

Microsoft's intelligent cloud segment surged 27.2 percent during the company's fiscal third quarter, to US$12.28 billion, up from US$9.65 billion during the same period a year earlier. Powering the growth was a 59-percent spike in Azure revenue.

"There is no question that moving to the public cloud, even at a time like this, is just capital efficient," Nadella said. "Even for businesses that are having tough economic cycles, one of the smartest things that anyone can do ... is to transition to the efficient frontier as quickly as possible--so that they can have more agility, more elasticity and better unit economics coming out of this, or even while you're in this crisis. So I think the migration to the cloud is absolutely a secular shift."

Looking ahead, Microsoft signaled it does not expect a slowdown in overall demand, despite challenges in areas such as advertising on LinkedIn. The company's guidance for its current quarter, its fiscal fourth quarter, is for revenue in a range of US$35.85 billion and US$36.8 billion--in line with the consensus estimate from analysts.

"In our commercial business, our strong position in durable growth markets means we expect consistent execution on a large annuity base, with continued usage and consumption growth across our cloud offerings," CFO Amy Hood said during the call Wednesday with analysts.

With Microsoft's huge emphasis on shifting to cloud in recent years, the company and its partners were able to respond quickly to the sudden surge in demand for remote-work solutions, Microsoft Channel Chief Gavriella Schuster said in a recent interview with CRN.

During Microsoft’s fiscal Q3, the company’s personal computing segment also saw growth. Microsoft in late February had scrapped its PC segment guidance for the quarter due to coronavirus impacts--but ended up hitting the guidance anyway because of increased remote work and distance learning, the company said.

Quarterly revenue for the personal computing segment reached US$11 billion, up 3 percent year-over-year, falling within the original guidance range of between US$10.75 billion and US$11.15 billion. Windows OEM revenue was flat, while Surface devices revenue grew 1 percent and Xbox content and services revenue climbed 2 percent.

Microsoft's stock price rose 2.5 percent in after-hours trading Wednesday to US$181.93 per share.

Overall, Davis said that Microsoft and partners such as Perficient have been well positioned to respond during this crisis, given the joint focus on shifting to cloud in recent years.

"During this time of uncertainty, our clients are looking for ways to maintain business operations, support business continuity, and improve remote work access and collaboration, all of which require cloud capabilities delivered at scale," Davis said. "Our strength as a long-standing Microsoft partner hinges on our cloud capabilities, along with deep and broad vertical expertise of both areas."