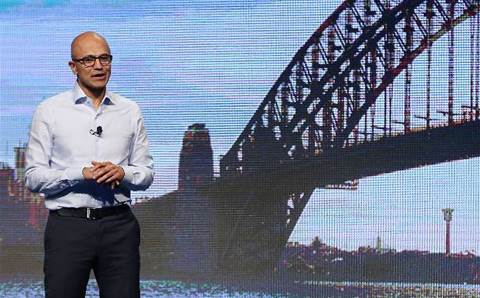 Satya Nadella has praised a number of Australia’s cloud and application-adopting organisations in his first visit to the country as the head of Microsoft.

Speaking at the Microsoft Australia Developer Event yesterday at the Star Event Centre in Sydney, The CEO extolled the virtues of the software giant’s cloud compute platform, Azure, as well as the company’s work in artificial intelligence, machine learning and data analytics for business.

“Everyone is becoming more and more digital. In some sense, every company now, whether you are a retailer or in health care or in insurance or in mining, you do want to think of yourself also being in a digital business,” he said.

"Everyone in this audience, every developer, has both that opportunity and also the responsibility to be able to create digital technology that creates surplus in our societies and in our economies.

“Our goal as a company is to provide the tools, the platforms so that developers can have that profound impact; across industries, across all walks of life.”

Nadella noted the efforts of Webjet, Cricket Australia, the Department of Human Services, BeyondBank and Bupa, each of which, he said, were case studies of how Microsoft’s Azure, Office and Dynamics 365, AI and Windows were improving business.

Webjet was highlighted for its ongoing use of Azure and new push into using blockchain for secure payments, while Cricket Australia was singled out for its machine learning and data usage research.

“Yesterday I had a chance to go to the MCG and onto the field which has been one of my dreams all my life,” Nadella said.

“Cricket is perhaps one of the richest sports when it comes to data, but how could you harness data to start having a more informed conversation about performance of teams, performance of players? To me Cricket Australia is beginning that journey using some of the same technology being used by industrial companies or healthcare companies or robotics companies.”

The Department of Human Services upgraded its 35,000 staff to Windows 10, the largest deployment of its kind in Asia Pacific, and worked with the operating system’s AI toolset to build new customer-interaction systems.

"We recognise that for technology to improve the lives of all, it's crucial that industry and governments work together. The work undertaken by DHS and Microsoft is an example of this collaboration.”

“Bupa is an insurance company that has taken Dynamics 365 and customised it in ways so they can respond to their customers in much more personalised ways.

“The same thing is happening in BeyondBank, where they have the same set of tools and really approached the empowering of every employee within the organisation who is responsible for customers to have that 360-degree view, and not just a 360 degree view of the customer but to be able to automate the task that customers expect them to do.”

The Microsoft CEO discussed the company’s ambitions around enhancing internet of things and mobility, connected households with compute-enabled sensors, and supercomputing infrastructure in the cloud, available for developers to use.

Personal computing was also addressed, with references to Surface Studio and Hololens running on Windows 10.

“We’re also innovating on the new input output, the new computing media: pens speech, ink and even augmented reality. We want to not only bring together new types of input-output, we want to balance that input output ratio,” he said.

“I believe in the last 10 years when we have thought about computers and computing, there has been more consumption. In the next 10 years we think there will be more of a balance between creation and consumption, and that requires us to push the envelope of inventing new form factors.

“Building out these new computers and a new way to do computing is only meaningful if it can have a broad impact inside of our organisations.”