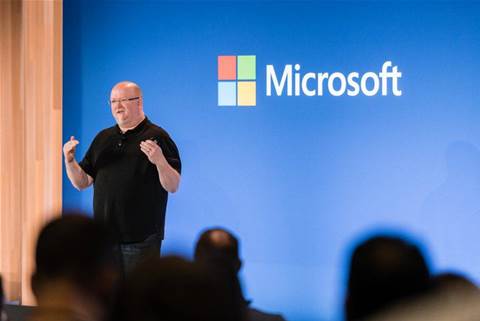 Microsoft chief technology officer Kevin Scott has a couple of tips when it comes to working from home amid the coronavirus (COVID-19) pandemic.

The one piece of gear that’s made the biggest difference for his home office/studio was the addition of a digital single-lens reflex camera (DSLR), according to Scott, who had been a remote worker before the virus started spreading globally.

“I've added a whole bunch of things, but probably the biggest bang for a buck is I added a DSLR with a good lens as a replacement for the webcam that I've been using,” Scott said during a virtual briefing for this week’s Microsoft Build 2020 developers conference. “Honestly, it's a night and day difference. You don't actually have to have a big expensive DSLR. There's some relatively inexpensive cameras, and it's so much better than the webcam that I had before. I'm just kicking myself that I didn't do it sooner.”

“One of these modern LED light panels can just make a big difference,” Scott said.

Scott also shared some of the big technology trends that are grabbing his attention.

“The biggest one -- and it's one that we have been thinking a lot about over the past two and a half, three years -- is this big transformation towards large-model AI (artificial intelligence) and this new set of techniques that we're calling self-supervised learning,” Scott said.

“The basic idea there is that your machine learning systems are now able to process huge amounts of unstructured data and to sort of teach themselves -- without a whole lot of human intervention -- very general things about the world,” he said. “And the bigger these models get, the more they can do, which means you're having to apply more and more compute power to the task of training. That's a hugely exciting thing for a systems builder, because it means that we're building AI supercomputers now that are just the most powerful machines that the world has ever seen.”

A second exciting technology trend for Scott is that transfer learning works with the AI models as they become larger and larger.

“You can train one of these very large models to learn a…set of general things, and then you can use that model in hundreds and hundreds of different tasks without having to retrain the entire thing,” he said. “You get to treat the model itself as a platform and sort of amortize the cost of running on this AI supercomputer to build a model in a bunch of different applications. We've certainly seen that with the way that we're doing AI at Microsoft -- it's really exciting -- and you're just sort of seeing it in dozens and dozens of different things that we're releasing, both features and products. We're excited to talk more about that with our developers, because we think this is going to continue to impact everybody's lives in a major way.”

Scott authored a new book on AI, “Reprogramming the American Dream: From Rural America to Silicon Valley -- Making AI Serve Us All,” that Harper Business released in April.

“One of the most important things to me…is that you look at the power of these machine learning systems and just the breadth of problems that they can solve,” Scott said. “What we need to do is democratize access to the tools as much as possible and as quickly as possible, so you can have as broad a swath of our collective human ingenuity involved in solving (problems).”

While writing the book, Scott said he traveled to Memphis to meet with agricultural technology entrepreneurs.

“They are able, because we are democratizing access to these technologies, to employ them in solving problems that you might not choose to solve if you're sitting in some urban innovation center like Seattle or Silicon Valley,” Scott said. “That's a super exciting thing, and we have definitely been pushing on that.”

Grow your software revenue by selling these 5 affordable, essential tools for the modern workplace
By Donna Goodison
May 21 2020
10:35AM