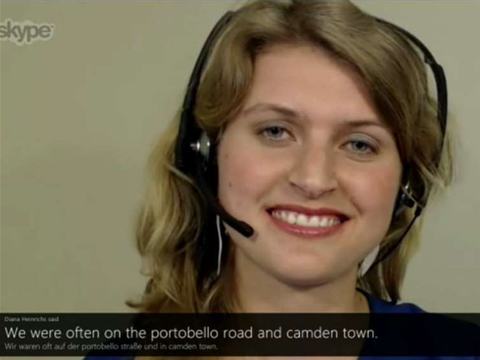 Microsoft has revealed a real-time translator for Skype that allows two people speaking different languages to hold a conversation with each other, with each hearing the other in their own language.

Dubbed Skype Translator, it was introduced by company CEO Satya Nadella on the first day of the inaugural Code Conference, hosted by re/code in California.

Nadella was joined by Gurdeep Pall, corporate vice president of Skype and Lync, who carried out a live demo with a German speaker named Diana.

In a separate video presentation, Peter Lee, head of Microsoft Research, said that "the problem of having a machine understand human speech has been around in research for a very long time".

However, the company is, he claimed "on the verge" of producing a universal translator, thanks to its researchers having switched away from a mathematical approach to the problem towards a neural networking approach.

Pall said Skype Translator can help overcome language barriers that "have been a blocker to productivity and human connection", in a blog post.

Comparing it to the fictional Universal Translator from Star Trek, Pall said the technology "opens up so many possibilities to make meaningful connections in ways you never could before in education, diplomacy, multilingual families and in business".

However, he cautioned it is "early days" for the technology.

Indeed, while the translation produced during the demo is accurate, it is noticeable both Diana and Pall were speaking slowly and taking care to articulate their words.

The first version of Skype Translator will be available to Windows 8 users as a beta app before the end of 2014.

Pall gave no indication when the technology might be extended to other desktop or mobile platforms.