Microsoft: Google's making up excuses to block our YouTube app 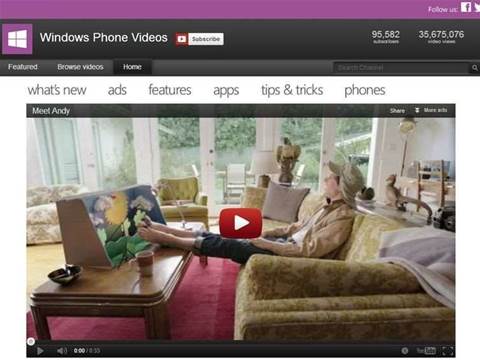 Microsoft has slammed Google for blocking its new YouTube app for Windows Phone, describing the search firm's reasoning as "excuses".

In a damning statement by Microsoft's deputy general counsel, David Howard, the company accused Google of deliberately obstructing the creation of a fully functioning YouTube app on Microsoft's mobile OS.

"We think it’s clear that Google just doesn’t want Windows Phone users to have the same experience as Android and Apple users, and that their objections are nothing other than excuses," said Howard.

"The [technical] roadblocks Google has set up are impossible to overcome, and they know it," he added.

Redmond first built a YouTube app in May, but that was promptly blocked after Google claimed the app violated its terms of service, namely by not displaying ads.

At the time, Microsoft complained Google hadn't made the relevant APIs available to build a compliant app. The pair then announced they would jointly work on a YouTube app that would roll out some time during the summer.

Microsoft then released what appeared to be the official app this week, with new features such as the ability to pin videos as Live Tiles on the Windows Phone home screen, and video upload capabilities.

But Google blocked the app for a second time this week, with Howard's statement confirming the partnership isn't going smoothly. Google said it wanted Microsoft to build a version of the app based on HTML - something David Howard described as impossible.

"This was an odd request since neither YouTube’s iPhone app nor its Android app are built on HTML5," he said.

Howard added that Microsoft had dedicated "significant" financial and engineering resources into building an HTML5 app but found - along with Google's own engineers - that it simply wasn't worth the effort.

He explained the company subsequently decided to publish a non-HTML5 version of the app "while committing to work with Google long-term on an app based on HTML5".

"Google, however, has decided to block our mutual customers from accessing our new app," he said. "It seems to us that Google’s reasons for blocking our app are manufactured so that we can’t give our users the same experience Android and iPhone users are getting."

Although Howard publicly asked Google to lift the block, the search company appears to be in no mood to compromise. "We're committed to providing users and creators with a great and consistent YouTube experience across devices, and we've been working with Microsoft to build a fully featured YouTube for Windows Phone app, based on HTML5," said Google.