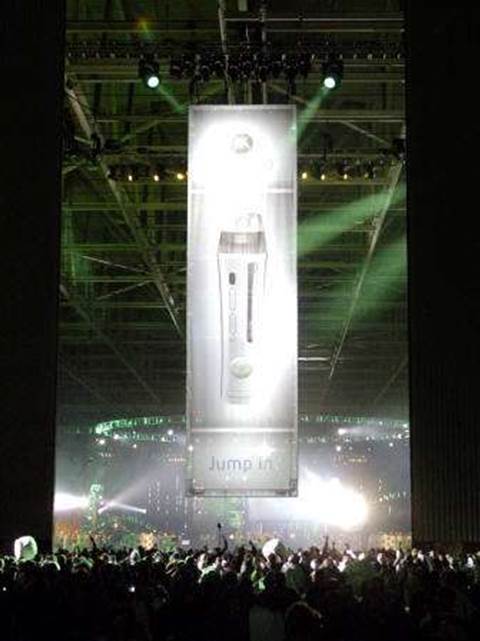 LOS ANGELES (Reuters) - Microsoft will not back down even if the launch of its Xbox 360 video game console fails to propel it to first place in the US$25 billion global market, Chairman Bill Gates said on Monday.

"We'll play again," Gates told Reuters in a telephone interview ahead of the Xbox 360 launch on Tuesday.

Microsoft will be the first of the major gaming console makers to sell a next-generation machine when the Xbox 360 goes on sale on Tuesday, and aims to take the lead from Sony.

"We learned a lot in the first round. We've got a chance not just to have higher market share, but also to grow the size of this market substantially," Gates said.

The Microsoft co-founder said the Xbox 360 will be better than the next-generation PlayStation 3 console from Sony. Sony's PlayStation 2 is estimated to now control about 70 percent of the global market.

"In terms of how we've balanced technology in the machine, we feel certain we've done a better job than Sony," he said.

"You won't really know that until a year from now, when people are talking about how the games on our machines compare to the games on Sony's machines," Gates said.

Microsoft says highlights of its new machine include high-definition graphics, online game play and web chat, as well as the ability to connect to music players and cameras.

Microsoft entered the console market in 2001 and grabbed the number two position despite significant handicaps. Sony's PlayStation 2 had a one-year running start and consumers were skeptical that the maker of the ubiquitous Windows software would do video games well or commit to a new market.

"We had no chance of being number one there," Gates said.

In almost five years, Microsoft has spent nearly US$5 billion on the Xbox, analysts estimate, making it one of Microsoft's biggest bets in recent years.

In the latest quarter, Microsoft's home and entertainment division, which includes the Xbox, had US$634 million in revenue, up nearly 21 percent from a year earlier. The division posted an operating loss, however, of US$138 million.

"We're looking at, between now and the end of June, over US$1.5 billion in sales on this stuff," said Gates, referring to estimated sales of around 5.5 million Xbox 360s, accessories and video games.

The Xbox 360 will be in stores before Sony's PlayStation 3 and Nintendo's Revolution, which are both expected next year, leaving Microsoft free of competition for several months.


Success not about money now

While analysts underscored the importance of Microsoft's vast wealth and stature, Gates said the battle is now about the games.

"It's not about spending at this point," he said, adding that the company now must deliver on expectations that it will move gaming forward.

There are significantly more launch titles for the Xbox 360, with 18 this time around, and over 200 additional games in development.

"Virtually all of those will ship in the next six months," said Gates.

The Xbox 360 is more powerful than its predecessor and shows games in high-definition. Early reviewers have been wowed by the graphics, and many gamers said they are willing to wait a year or so to see what game developers can do with the new technology.

Gamers have also embraced the Xbox Live online service, which among other things allows a team of players in one living room to compete against an equally matched team elsewhere. The service also provides downloads of classic games, which tend to appeal to older gamers and women.

"Halo" from Microsoft-owned Bungie Studios sparked sales of the original Xbox. When asked to identify a killer title for the Xbox 360, Gates declined.

"I wouldn't have picked right last time if you had asked me that question. So I won't pick this time," he said.

Grow your software revenue by selling these 5 affordable, essential tools for the modern workplace
By Lisa Baertlein
Nov 22 2005
10:00AM