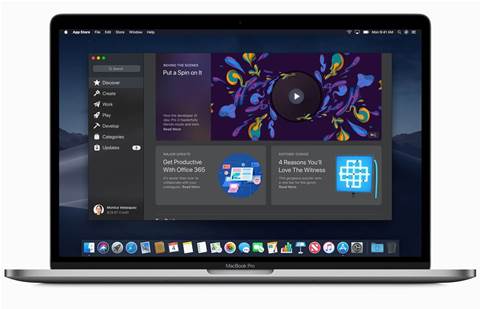 Apple is bringing more third-party applications to its Mac App Store, and rival Microsoft will be one of the first software vendors to jump on board.

As part of Apple's Worldwide Developer Conference 2018 keynote presentation this week, the company announced a redesign for the App Store in the upcoming macOS Mojave operating system out later this year.

The new Mac App Store will sell Microsoft's Office 365 suit, allowing Mac users to download, install and manage Microsoft's subscription-based productivity suite from one location for the first time. Prior to this, the only Office 365 application available from the Mac App Store was OneNote.

“Office 365 provides the best of both worlds for Mac users — a productivity experience that is unmistakably Office, but specifically designed for the Mac," said Microsoft corporate vice president Kirk Koenigsbauer.

"We’re excited to provide our joint customers with easy access to downloads and updates by bringing Office to the newly redesigned Mac App Store.”

A handful of other software vendors will also release their products on the new Mac App Store, including Lightroom CC from Adobe, BBEdit from Bare Bones, Transmit from Panic, Lens Studio from Snap and Houseparty.

The revamped Mac App Store will be available as part of the new macOS Mojave this Spring, which was also announced at WWDC 2018 today.

Microsoft only brought Office 365 to its own Microsoft Store last year, allowing users and alternative to downloading it from the Office website.