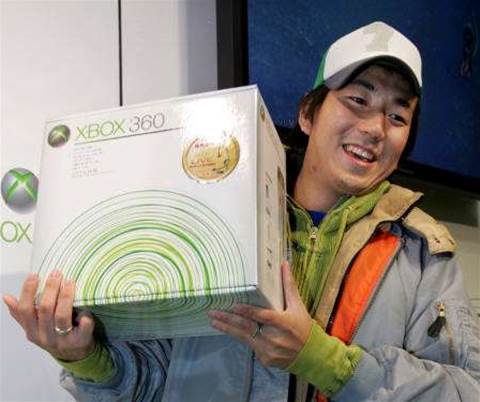 LOS ANGELES (Reuters) - Microsoft Corp. is counting on the online gaming capability and high-definition graphics of its Xbox 360 console to win a new following in Japan, a key market in its quest to unseat Sony as the dominant game console maker, a senior executive said on Friday.

Microsoft, which has launched the Xbox 360 in Japan, has struggled hard to gain ground in that market against home-grown rivals Nintendo and Sony, whose PlayStation 2 console is the global best seller.

"We are up and running here," Microsoft's Xbox marketing chief Peter Moore told Reuters in an interview from Tokyo.

Microsoft, which was a distant third in Japan with its first Xbox, held a launch party for hard-core gamers in Tokyo's Shibuya, a trendy shopping and entertainment centre.

"We think (Japan) is the springboard to Asia," said Moore, who added that he thinks Japanese gamers will take to its Xbox Live online game service that enables players to chat, compete, try game demos and shop.

Moore said that as of three hours into the Saturday launch, the company appeared to have sold several hundred units at the store he attended.

Microsoft is selling only the premium Xbox 360 package in Japan. It is priced at 37,900 yen (US$315) and includes a removable hard drive that lets owners play games written for the first Xbox.

The world's biggest software maker sold fewer than 500,000 of its original Xbox consoles in Japan, where Sony is estimated to have 80 percent share.

Microsoft is expected to easily surpass that number with its follow-on console, which will have the market all to itself for several months while Sony and Nintendo ready their next-generation PlayStation 3 and Revolution consoles for launch next year.

Moore would not say how many units were released in Japan, adding it was too early in the day to tell whether stores would sell out. Meanwhile, supplies in the United States and Europe disappeared quickly and remain in short supply.

A spokeswoman for Japanese electronics retailer Bic Camera said it expects to have remaining stock at its main store.

Microsoft has convinced some of Japan's hottest creators, animators and musicians to make games for the new Xbox, they include publisher Square Enix and Hironobu Sakaguchi, the original producer of the popular role-playing game "Final Fantasy".

Still, analysts and gamers have dinged Microsoft for its launch line-up, saying it has a distinctly Western flavour, favouring shooting games that are more popular in the United States over the fantasy role-playing titles favoured in Japan.

Meanwhile, Square Enix has made a test version of its hotly anticipated "Final Fantasy XI" available for the Japan launch. The final version is not due until next year.

Based on his observations, Moore said Microsoft's own "Perfect Dark Zero" and "Ridge Racer 6" from Japan's Namco Ltd were selling most briskly.

Microsoft is aiming to sell 2.75 million to 3 million Xbox 360 units in the first 90 days after the launch date.

Grabbing the hybrid cloud opportunity with Lenovo and Azure Services
By Lisa Baertlein
Dec 12 2005
8:23AM