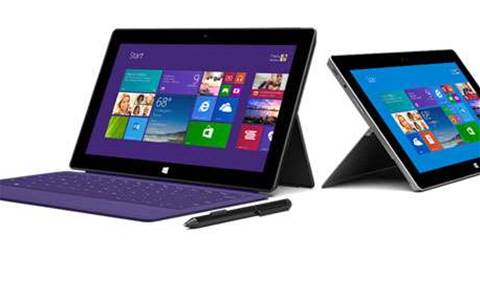 Microsoft is considering expanding its Authorised Devices Reseller Program to allow more of its US partners to sell Surface tablets, CRN US has learned.

Microsoft is reaching out to a "limited number" of partners with the "potential" to help it meet its sales goals for Surface, Eric Martorano, general manager of Microsoft's US Partner Sales organisation, wrote in an email to partners earlier this week, which was viewed by CRN US.

Sources told CRN US that Microsoft has contacted around 100 US partners that sell PC and tablet hardware. Microsoft is asking them to fill out a questionnaire to gauge whether they meet its requirements for selling and supporting Surface tablets.

A spokesperson for Microsoft, declined to comment on the email or the questionnaire. "We are exploring future phases of the program and we have nothing further to share at this time," the spokesperson said in an email.

An Australian Microsoft spokesperson told CRN "we don't have anything to announce at this time". In Australia Microsoft has authorised two distributors and 13 resellers to carry the range.

Previous reports claimed Microsoft will make its Surface tablets available to all Australian resellers; however, this was never confirmed by Microsoft.

With Surface 2 tablets now on the market, Microsoft needs more hands on deck to help sell them. "With the recent release of new Microsoft Surface tablets and accessories, Microsoft is more focused than ever on selling devices to commercial customers," Microsoft said in the questionnaire, which was viewed by CRN US.

The Surface questionnaire sheds light on why Microsoft has been reluctant to let the majority of its partners sell Surface tablets. Microsoft's requirements, as outlined in the questionnaire, are stringent.

For example, Microsoft asks partners for a "potential forecast for a one-year commitment to Surface & Surface Pro unit volumes," with options ranging from one to 5,000 units, all the way up to 100,000-plus units. Partners also are asked if they can "provide pipeline visibility, weekly forecast view and deal closure metrics to Microsoft."

Microsoft is asking partners how many staff they'd be able to "dedicate to joint account planning" to find and manage commercial customers for Surface tablets, with options ranging from one to five people.

Microsoft also wants to know if partners have call centre, customer financing, services and post-sales support capabilities. Partners are asked to estimate how many hardware-based sales engagements they're doing each month, with options ranging from one to 50.

Invited partners have until 6 December to complete the questionnaire and Microsoft plans to inform them of "next steps" 20 December, according to the document.

Considering that Microsoft has angered many partners with its Surface sales policy, it's safe to say that not all those contacted will be jumping at the opportunity.

Microsoft in June began letting a select group of large account resellers carry Surface tablets, but still is not letting its broad channel sell them. Microsoft hasn't explained its reasons for the policy, and that lack of communication has been a source of frustration in the channel.

Several partners that Microsoft has contacted told CRN US the potential expansion of the Surface program is a positive sign.

Microsoft partners that haven't been invited to fill out the questionnaire are taking a wait-and-see stance on the potential expansion of the Surface program.

Microsoft broke out Surface sales for the first time in its first-quarter earnings in October. Surface tablets generated $400 million in sales during the quarter, and Microsoft said it sold twice as many of them as it did during its previous quarter.

With Surface tablet sales on the rise, and Windows 8.1 tablets hitting the market, Microsoft has set a combined goal of 16 million tablet sales this holiday season, Microsoft blogger Paul Thurrott reported in November.

Grow your software revenue by selling these 5 affordable, essential tools for the modern workplace
By Kevin McLaughlin
Dec 5 2013
8:48AM