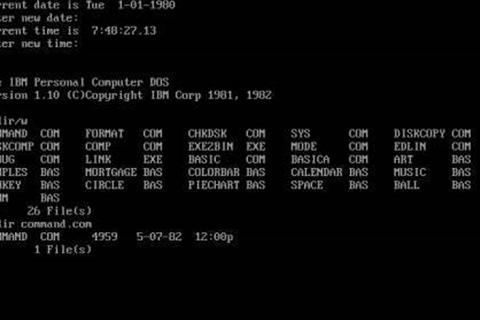 You can't keep a good operating system down. Although it's been 18 years since the text-entry OS was officially retired, Microsoft has made MS-DOS publicly available on its recent acquisition GitHub.

Previously, the source code had been released on the Computer History Museum, but four years later it's now mirrored on GitHub.

“Why? Because it's much easier to find, read, and refer to MS-DOS source files if they're in a GitHub repo than in the original downloadable compressed archive file,” explains Rich Turner, Senior Program Manager on the Microsoft blog.

Obviously, this isn't a re-release intended to replace Windows 10 on your company network. Rather, MS-DOS 1.25 and 2.0 are available by parties interested in examining how the veteran operating system behaves. As such, the source files are intended purely for reference, and Microsoft understandably isn't allowing pull requests or modifications on GitHub.

You'll find a reference to this (relatively) unwieldy size within the source notes: “COMMAND.ASM is currently too large to assemble on a micro.” It added some useful features though, including support for 180 and 360-kilobyte floppy-disk drives.

MS-DOS would go on to graduate all the way up to version 8.0 before it finally outstayed its mainstream usefulness in 2000, when it ceased to be part of the shiny, new Windows XP software.

Eighteen years later, it's available purely as a curiosity, rather than to improve productivity, but Turner is confident that people will enjoy the trip down (32kb) Memory Lane. “Enjoy exploring the initial foundations of a family of operating systems that helped fuel the explosion of computer technology that we all rely upon for so much of our modern lives,” he writes.