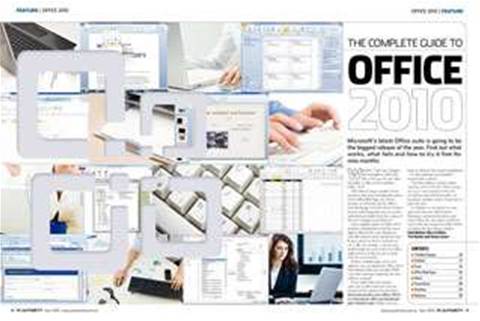 Microsoft's Office 2010 suite has its official Australian launch today for businesses, although expectant buyers will have to wait before they can get their hands on a boxed copy in the shops.

Two editions of Office 2010 - Standard and Professional Plus - are enterprise editions available only to organisations with a volume licensing agreement.

Firms with a Software Assurance (SA) agreement have been able to download these editions from MSDN or TechNet since 27 April, while those not on SA but which are volume customers, i.e. owning more than five licences, can now buy through Microsoft resellers.

Unlike earlier editions of Microsoft Office, there are only three versions that will be available via retail: Office Home and Student, Office Home and Business and Office Professional.

Office Home and Student, which is aimed at families and students, includes Word, Excel, PowerPoint, OneNote and the Office Web Apps. This is licensed strictly for non-commercial use, according to Microsoft.

Office Home and Business, intended for small businesses and those working at home, has the same set of applications but adds Outlook.

Office Professional is touted as the premium version for users with advanced needs, and includes everything in the previous versions plus Publisher, the Access database and premium technical support.

Microsoft will be hoping that the new suite will help it compete with Google in the online apps market, although analysts are less sure, according to V3.co.uk's analysis of the battle.

Google went on the offensive yesterday in a blog post which urged existing Microsoft Office customers to "upgrade" to its own Google Docs online productivity suite.

Cloud application revenue made easy
By Phil Muncaster
May 13 2010
8:22AM