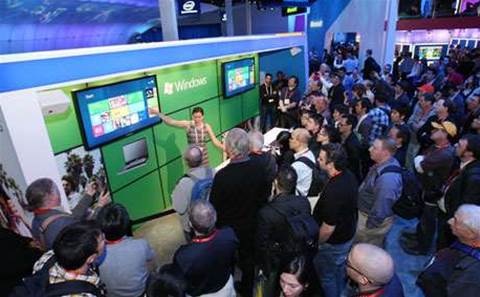 Microsoft will be returning to CES this year - although not to fill the top keynote spot.

Microsoft's CEO used to open the show with a keynote address, but Steve Ballmer halted the tradition at last year's show - despite still showing up on stage for a surprise visit during Qualcomm's keynote.

The company also didn't take out any floor space at the most recent show, saying it was releasing its products on a different schedule.

For the next CES, in Las Vegas in January, Microsoft has bought a "significant" amount of space - but only in meeting rooms.

"Microsoft is officially back in the International CES," Gary Shapiro, president of organising body the Consumer Electronics Association, told the BBC at a CES Unveiled event in London. "They are taking out significant space in meeting rooms - it's actually a larger presence than I believe they have ever had."

"Microsoft will have to make the decision who the rooms are open to or not, but I imagine they're very open to the press," he added. "We have had a tremendous partnership [with Microsoft] going back to the very beginning. You know, we had one little blip this year... but now we're happy to have them back with a physical presence."

We'll have to wait and see if Ballmer bounces onto stage during this year's official opening keynote - given by Intel's new CEO Brian Krzanich - but it will be his final opportunity as CEO of Microsoft, following his announcement that he is to step down within the year.

Wearable tech, high-definition displays, 3D printing, gesture recognition and sensor technologies are all likely to be major trends at the 2014 show, according to Shawn DuBravac, chief economist and director of research at CEA.

He predicted that "mass customisation" would also be a key trend, pointing to areas such as 3D printing as well as the personalisation offered by the Motorola X smartphone, where users will be able to pick colours and other aspects when ordering their handsets.

DuBravac also pointed to wearable technology and always-connected sensors, saying systems will "start to deploy the information that sensors are gathering to make decisions for us". As examples, he cited semi-autonomous cars that decide when to slow down, as well as water bottles that track when you're likely to be dehydrated.

CES will feature a 3D printing zone - when it was first announced, it sold out, so CEA expanded it, and it out again for a second time - as well as an area dedicated to motion-sensing technologies.