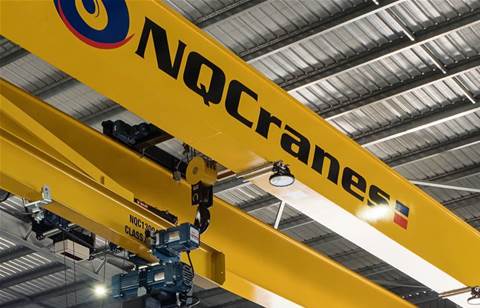 Stephen Goodson, the long-time IT manager of Mackay-headquartered North Queensland Cranes (NQCranes), decided the time had come to overhaul the IT systems of the growing company.

The decision was more than reasonable: Goodson is one-man IT team so when the company's aged systems run into trouble he's always the one to fix them, making it almost impossible for him to take a much-needed break.

That's a sub-optimal for NQCranes, as it supplies and services cranes and hoists across Australia and in Papua New Guinea, and has a team of 100 staff servicing 15,000 pieces of equipment.

With the company growing and the systems not getting newer, Goodson knew it was time to rethink the underpinning tech and migrate to the cloud to make it more scalable and maintain business continuity.

Goodson met Microsoft partner Apache and its director Rob Garsia at Telstra Vantage in 2016 as he was looking for someone to help kickstart the migration.

“We thought we were a good match, so we had a bit of a chat about what the objectives were and [NQCranes] basically needed both business continuity and scalability,” Garsia told CRN.

Garsia added that they were also working on a specific timeline so NQCranes would be eligible for a grant from both the federal government and the Queensland state government.

“For an organisation of our size to be able to afford what we’ve done, it’s a big commitment — replacing an ERP system and CRM is not cheap — it doesn’t matter who big or small you are,” Goodson told CRN.

“We saw an opportunity with the Queensland state government, specifically the “Made in Queensland” grant, which we applied for.”

The Made in Queensland grant is a $46 million initiative supporting small to medium sized manufacturers in the state “to become more internationally competitive and adopt innovative processes and technologies”, according to the Queensland government website.

The grant was approved when NQCranes, with the help of Apache, presented its digital transformation and cloud migration plans, receiving an undisclosed amount to help pay for some of the work.

“They assessed that our approach and our desire to implement and end to end business cloud solution underpinned by the flagship ERP products Business Central with Field Service, was valid enough I suppose, to commit a fair bit of funding to help us with our strategy,” Goodson said.

“That kind of speaks to the validity of the project, if someone else external has assessed it and said, ‘Yep, we will help you pay for that’.”

Upon approval, both parties agreed on an Office 365 and Dynamics 365 setup, including what Microsoft said is one of the very first integrations of the Dynamics Field Service capability with Business Central.

NQCranes had been using Microsoft Navision as its ERP, but was an older implementation and highly customised, making updates and upgrades tricky. Moving to the cloud meant continuous updates, and Dynamics 365 also allowed for some degree of tailoring.

“One of the main pain points for us is we have service technicians that we may not see for three, four, five weeks at a time. So, we needed the ability to be able to give them work and have them interact with the ERP system, in a controlled manner. So, when they use a part, when they're servicing and when they put hours on a job, all those sorts of things are captured and recorded,” Goodson said.

“It was done with a fairly manual process before where technicians would send in a document that that would then get typed into the ERP system, to record that transaction so we could then bill our customers.”

NQCranes also wanted to streamline the process further by automatically generating client invoices when technicians enter the data into the system.

Apache achieved it by tweaking the integration between Field Service and Business Central, while also extending the interaction with field workers using Microsoft Flow, so that a work order is created for them in Business Central live.

Some security additions now also allow staff to work away from their desks, allowing senior leadership to run the business from a different city from where their business responsibilities are. One of the execs work in Townsville even if the responsibilities are at the Mackay headquarters.

Garsia said some advanced threat protection and some multi-factor authentication were rolled out and wrapped around the whole solution, while Microsoft Intune was deployed to look after remote devices.

Apache is also working with Dicker Data to develop “Connected Field Service”, infusing the NQCranes Dynamics setup with IoT, machine learning and AI capabilities with the aim of improving OH&S for the operators and impacted employees.