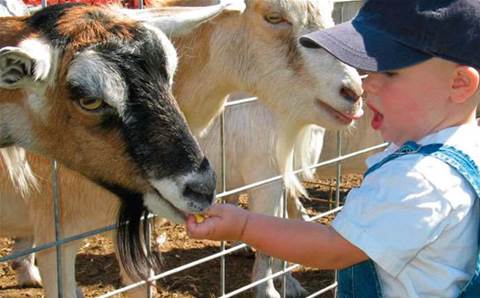 The Royal Agricultural Society of NSW has ditched its "confusing" array of websites and email platforms to adopt Microsoft's suite of cloud services, allowing the 194-year-old organisation to cope with dramatic spikes in website traffic.

The organisation, which was founded in 1822 and runs the Sydney Royal Easter Show, worked with implementation partner Levo Group, a digital agency based in Sydney and Melbourne, on the project, which saw it migrate off its on-premises systems and move to Azure.

Royal Agricultural Society (RAS) chose Episerver after an intense market research to find a new CMS, said Callum Hoogesteger, projects director of Levo Group, which beat out four other Episerver partners to land the high-profile client. "I have never seen another organisation go so in depth on CMS research."

RAS had been beset by outmoded communication channels, according to Cale Maxwell, senior manager for digital, PR and content. "The RAS was behind the times," he said. The website for the Sydney Royal Easter Show, which surges from zero page views to 20 million over a three-week period in March and April, wasn't built to scale.

"Two years ago, the society still relied on posting letters or sending bulk emails to communicate with members and invite people to enter competitions," Maxwell said. "This prevented a personal, meaningful experience.

"The society’s multiple websites and five email platforms were uncoordinated and created confusion, not only for members and the public, but also internally. Further, while the RAS had acquired a wealth of insights into the agricultural industry and its consumer base, they were hidden in a complex, disorganised database that was as hard to access as it was to understand."

After first turning to Microsoft Azure in 2014, the RAS websites are now integrated, "so when one updates the others do too".

"We also have a dynamic, personalised Sydney Royal Easter Show website, where people can use single sign-on to easily access their account, whatever device they’re using," Maxwell said.

Levo Group's Hoogesteger said Episerver's flexible approach to billing was a unique market advantage that was helping the CMS provider win against competitors such as Sitecore. Rather than pay for licences based on number of servers, "you pay based on the traffic".

"Episerver will work with the client to match the client's traffic profile and plan accordingly," Hoogesteger said.

He said this flexible licensing model was only possible when Episerver was hosted on Azure, and this has helped sway Levo toward the Microsoft cloud. "We are an Amazon partner but we have become massive Azure fans. It is unbelievable, they have really caught up.Three years ago I wouldn't even look at them. They have come leaps and bounds," Hoogesteger said.

"We did look at Azure three to four years ago and they couldn't even host their own SQL Server correctly. AWS had a better solution in SQL Server and now Azure has more than made up on that," Roberts said.

Levo is suitably proud of the flagship project, which included an array of complex integrations to third-party systems, including ticketing, events management system Ungerboeck, social media, an exhibitor portal and a mobile app developed by Sydney-based Mobiddiction.

While the Easter Show is the best-known brand, the project also spanned sites for Sydney Royal, Sydney Showgrounds and the Royal Agricultural Society website.

After winning the project in mid-2015, Levo worked with the client toward a "very strict" deadline of February 2016. After the Royal Easter Show concluded, Levo has been in continuous improvement mode with the client.

Data has been central to the project too, RAS' Maxwell said, even taking analytical smarts to that Easter Show favourite, showbags.

"We also implemented Microsoft Power BI to enable us to see activity from online users in real time, such as what they’re adding to their wish lists on the SRES website," he said.

"This information is used inform our marketing activity. For example, if it shows us a large number of people are looking at the same showbag, that item can be used in promotions for a similar audience.

"We can also ask people questions like what time they wish to visit the show and whether they’re interested in family events, using Power BI’s analytics to plan their ideal day at the SRES.

"In addition, we’re using Power BI to develop a new competition system that can generate reports whenever we choose, track our records and compare results year-to-year, all in easy to see dashboards."