Microsoft reveals cross-cloud Azure and much more at Iginte 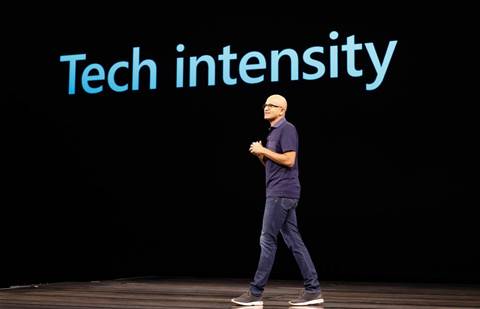 Microsoft has used its Ignite conference to introduce a "broad range of new tools and services to help companies and individuals put their data to work for them, help their employees build expertise quickly, and take advantage of key Azure tools no matter what cloud provider they’re using," the company said in a blog post.

The most significant of the new announcements is "Azure Arc", that "offers Azure services and management to customers on other clouds or infrastructure, including those offered by Amazon and Google," Microsoft said.

"Azure Arc extends these proven Azure management capabilities to Linux and Windows servers, as well as Kubernetes clusters on any infrastructure across on-premises, multi-cloud and edge," said Julia White, corporate vice president for Azure, in a blog post.

Additionally, with Azure Arc, "customers now have the flexibility to deploy Azure SQL Database and Azure Database for PostgreSQL Hyperscale where they need it, on any Kubernetes cluster," White said.

"Azure Arc really marks the beginning of this new era of hybrid computing where there is a control plane, built for multi-cloud, multi-edge," said Microsoft CEO Satya Nadella. "And not only that, but we for the first time support managed data services to be anywhere your compute is. So, again, managed data services that are multi-cloud, multi-edge."

Touted by Microsoft as a "limitless" analytics service, Azure Synapse Analytics serves as a combination offering of data warehousing and big-data analytics, the company said.

The service, which can use either serverless or provisioned resources, provides "a unified experience to ingest, prepare, manage, and serve data for immediate BI and machine learning application," Microsoft said.

The service ultimately enables data professionals to "collaborate, manage, and analyze their most important data with ease all within the same service," Microsoft said.

"We're taking the same approach of using the cloud-native memory hierarchy and storage hierarchy to redefine the rules around analytic workloads," Nadella said. "We want to bring together what until today have been two separate categories—data warehousing and big data. That means your unstructured and structured analytics can be brought together with unprecedented scale."

Alongside updates to Azure, the Microsoft 365 platform is also getting some new additions at Ignite 2019. Project Cortex in Microsoft 365 is a new service that leverages AI to automatically classify all of an organization's content into topics.

This forms a network of knowledge that "improves individual productivity and organizational intelligence, helping identify experts on specific topics, and surfacing knowledge through interactive experiences across Microsoft 365," Microsoft said. Project Cortex -- which is the first new service to join Microsoft 365 since Microsoft Teams -- is in private preview and is expected to be generally available during the first half of 2020.

Microsoft has renamed its automated workflow solution, Microsoft Flow, as Power Automate. The Power Automate solution offers API- and UI-based automation for enterprises through a unified platform, and is now getting enhanced with robotic process automation capabilities, Microsoft said.

Dubbed UI flows, the capabilities enable automation of repetitive tasks, as well as legacy applications, in order to simplify workflows, the company said. UI flows are now in public preview.

"Creating a UI flow is a simple and familiar point-and-click / low-code experience that makes it easy for users to turn manual tasks into automated workflows by recording and playing back human- driven interaction with software systems that don’t support API automation," said James Phillips, corporate vice president for business applications, in a blog post.

In the realm of security, Nadella pointed to the launch of Microsoft Endpoint Manager as a key step forward. Endpoint Manager "brings together the comprehensive management control plane for all endpoints," he said.

"Just last year, the total amount of cost of cyberattacks was $1 trillion. And the sad part of this is, the people who are most impacted by this is small and medium businesses all over the world, and consumers," Nadella said. "That's why we have focused on this end-to-end security architecture. From identity to devices to cloud applications to information and data to infrastructure, how do we have one integrated architecture?"

With Microsoft Endpoint Manager, "you now can really deploy the security policies—not only can you find the vulnerability, but you can deploy the remediation to all endpoints, all infrastructure, all data. That's what we mean by the end-to-end architecture," Nadella said.

Microsoft announced that the next version of the Edge browser is nearly ready for prime time—with general availability planned for Jan. 15, 2020.

The new Microsoft Edge is being built on Chromium OS, the same open-source project that powers Google Chrome.

Key updates in the new Edge browser include an enterprise new tab page, "where you’ll have direct access to your Microsoft 365 files, sites, and intranet search, making every tab you open a portal to productivity," said Jared Spataro, corporate vice president for Microsoft 365, in a blog post.

Nadella also highlighted a project within Microsoft that's in more of a forward-looking vein--with Project Silica, an effort to use quartz glass as a storage device.

Microsoft, in collaboration with Warner Bros., has successfully stored the original 1978 "Superman" on a piece of glass approximately the size of a coaster, as the first Project Silica proof of concept, the company announced. Project Silica uses laser optics to encode data in glass and then uses machine-learning algorithms to decode the data.

The glass is incredibly durable, and was able to endure tests including boiling, baking and scratching, Nadella said.

"That's the frontier of new storage systems," he said, saying that Project Silica aims to be "bringing new innovation to even core storage systems going forward."

The CEO couched his remarks by saying Microsoft is trying to help more businesses take advantage of technology.

"We want every organization to be a digital software company. And that means you all need to have the capabilities to be able to turn every organization into a digital company," Nadella said during his keynote address. "In fact, our goal is to commoditize digital tech. We don't want it to be just the province of a few companies in the West Coast of the United States or the East Coast of China."

Ultimately, "we want every company out there to be a tech company in its own right, and you are the community that's going to make that happen. And our mission is to empower you to do that," he said.