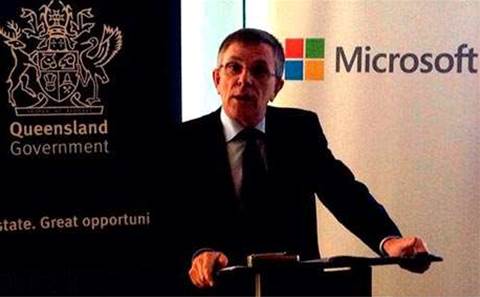 Adoption of Office 365 in Australia could see a significant boost with news that up to 149,000 public servants in Queensland could move onto the Office 365 hosted mail service.

The Queensland Government has inked a new deal with Microsoft that could become the largest non-education Office 365 deployment seen in Australia across both the private and public sectors.

Should the rollout reach full adoption, it will become the largest non-education Office 365 deployment seen in Australia across both the private and public sectors.

The agreement also represents an opportunity for services providers like Data#3, which is one of several providers on a preferred government service provider panel.

Launching the partnership in Microsoft’s Brisbane office this morning, IT minister Ian Walker said the deal – worth $26.5 million over three years – is set to save the state $13.7 million over that same period based on the value of its predecessor.

“Under the previous arrangement the Queensland government was not able to transition the licences that it had to the cloud, but the new contract is cloud ready and it means that agencies can make the migration as and when they are ready,” Walker said.

The state will only pay for what it uses and licence numbers will be benchmarked against reports from the Public Service Commission each year.

The whole-of-government agreement will cover all departments in the state except for the Department of Education, Training and Employment, which has its own specialist arrangement with Microsoft in place, owing to its size.

Walker also confirmed, however, that uptake would not be mandatory and there is no timeline for having all agencies migrated across.

He said his department (Science, IT, Innovation and the Arts) is “not going to be a department that tells everybody what to do.”

“Our model of IT is that each department is responsible for its own business needs.

“But we are saying ‘you now have the tools available to you, and we’ll certainly be encouraging them to make the most of it,” he said.

He said he was confident that the Office 365 rollout would not fall into the same poor adoption traps that undermined his Labor predecessor’s Identity, Directory and Email Services (IDES) program, which saw only 3100 Queensland staff upgrade to Exchange 2007.

“Agencies have been part of this process and [this contract] is what they want,” he said. “And with our Directors-General board and our CIO committee we have that collegiality and we have confidence that the departments will move quickly.”

No quick fix for XP

The new deal does not cover operating system licences, which will continued to be managed on an agency-by-agency level.

Walker said that arrangements with Microsoft are in place to provide custom support to those entities that haven’t yet fully migrated off the now unsupported Microsoft XP.

His own department is still running XP on 40 percent of PCs.

Walker and Microsoft both declined to provide a value for those deals.