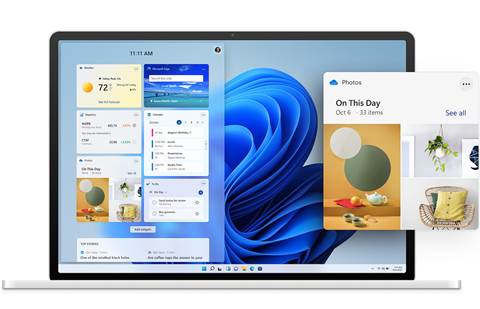 Microsoft on Thursday announced Windows 11, a new version of its Windows operating system that will include direct integration with the Teams collaboration app, a refreshed user interface and a revamped Microsoft Store.

The successor to Windows 10, which launched in 2015, Windows 11 is “the first version of a new era of Windows,” Microsoft chief executive Satya Nadella said during a virtual announcement event on Thursday. “We are building for the next decade and beyond.”

The widely used Teams app, which had 145 million daily active users as of late April, will be easier to connect to in Windows 11, Microsoft chief product officer Panos Panay said during the announcement event.

During a demonstration of the new operating system, Microsoft showed a “one-touch” experience for launching Teams communications — including chat, call and video calls — which doesn’t require users to first fully open the Teams app. “It’s just fast — and you’re in,” Panay said.

Teams will be placed “front and centre” in the taskbar in Windows 11, he said. Teams users will also be able to mute/unmute their mic and share their desktop or an application directly from the taskbar, Microsoft disclosed.

The Microsoft Store is also getting an overhaul in Windows 11 that includes updates such as “making space for more content” and the ability to run Android mobile apps and games on Windows, Microsoft said.

The company announced that a partnership with Amazon will bring the Amazon Appstore catalogue of Android apps and games to Windows.

Windows 11 will also offer an array of updates to the user interface — including a centring of the Start button and taskbar icons (similar to macOS), a redesigned Start menu (replacing live tiles with pinned apps and recent files) and the use of rounded corners across the operating system.

Security updates in Windows 11 will include a requirement that PCs have a security chip, such as the TPM2.0 chip, to run the operating system.

Microsoft is also “ensuring protections like Hardware-Based Isolation, Secure Boot and Hypervisor Code Integrity are built-in and turned on by default [in Windows 11] to protect from malware and sophisticated attacks,” said Nicole Dezen, vice president for device partner sales in the Global Partner Solutions organisation at Microsoft, in a blog post.

In terms of channel sales opportunities, Dezen said in the blog that “showcasing the benefits of modern hardware on Windows 11 can accelerate device refresh.”

“By leveraging Windows and Microsoft 365 technologies and tools such as Azure Active Directory, Intune, Endpoint Analytics, Autopilot and Cloud Configuration, partners are well-positioned to deliver highly scalable, cloud-based device and application deployment, management, custom solutions, and support services. And lastly, with Windows 11 and Microsoft 365, partners can deliver the zero-trust ready identity and security services that commercial customers are searching for.”

During the Thursday event, Nadella said that “today marks a major milestone in the history of Windows. It’s the beginning of a new generation.”

“With Windows 11, we have a renewed sense of Windows’ role in the world,” Nadella said.

The unveiling of Windows 11 comes amid revived interest in PCs that has been ongoing since the start of the pandemic, and the resulting shift to working and learning from home.

Global PC shipments rose 12.9 percent in 2020, and are expected to grow 18.1 percent in 2021, year over year, research firm IDC has reported. By contrast, PC shipments grew during only one of the previous eight years, according to IDC figures.

At the same time as PC demand is surging, the dominance of Windows as an operating system for traditional PCs has begun to erode. Windows fell from an 85.4 percent share of the laptop/desktop/workstation market in 2019 to an 80.5 percent share in 2020, IDC reported.

The trend continued during the first quarter of 2021, with Windows’ share of that market down to 74.9 percent, Chrome OS up to 15.7 percent and macOS up to 8.1 percent, IDC reported.

Microsoft confirmed in May that it had scrapped Windows 10X, its version of the operating system designed for dual-screen devices that would have rivalled Google’s Chrome OS.

With Windows 10, Microsoft took the approach of rolling out feature updates on a twice-a-year basis – a change from the previous practice of releasing brand-new versions of the Windows operating system every few years.

But in a recent update to a Microsoft support document, the company listed October 14, 2025, as the end-of-support date for Windows 10 Home and Pro, as well as for the Pro Education and Pro for Workstations editions of the operating system.

Originally released in July 2015, the end-of-support date for Windows 10 would give the operating system just over a 10-year run.