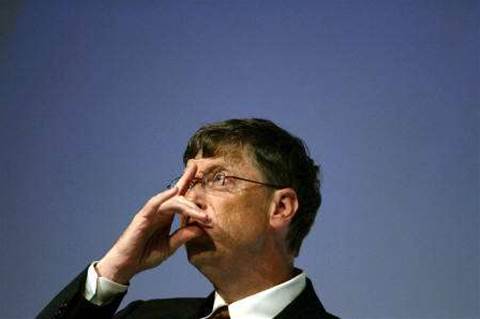 SEATTLE (Reuters) - Microsoft on Thursday posted a 24 percent rise in quarterly profit on robust sales of its Windows software, but tempered expectations about a spike in sales of its upcoming video game console and set a current-quarter revenue target below Wall Street expectations.

Microsoft launches the Xbox 360 game console on 22 November, the first of a number of key product launches over the next year or so.

Chief financial officer Chris Liddell told Reuters Microsoft aimed for more of a "gradual ramp" of Xbox sales in order avoid running out of machines soon after the launch.

"The analysts were expecting more of a launch spike than we were," he said.

Strong sales of personal computers, which Liddell saw rising 9 percent to 11 percent in the year to June 2006, drove results in the September-ending fiscal first quarter.

Excluding a legal settlement charge with RealNetworks, Microsoft earned 31 US cents per share in the first fiscal quarter, topping Wall Street expectations by a penny.

Revenue rose to US$9.74 billion from US$9.19 billion, just behind Wall Street expectations.

Microsoft forecast revenue in the December-ending quarter of US$11.9 billion to US$12.0 billion and diluted earnings per share of 32 US cents, or 33 US cents.

"I think the big thing is the second quarter sales and earnings being below expectations," said Tim Ghriskey, chief investment officer of Solaris Asset Management.

Analysts had expected revenue of US$12.26 billion in the December quarter.

The company also said it would accelerate its stock repurchase plan, aiming to finish the remaining US$19 billion buy-back no later than December 2006.

Wall Street had forecast a US$1.31 per share profit on US$44.29 billion for Microsoft's current fiscal year.

Microsoft is trading at 19 times estimated earnings for 2006, below the average price-earnings ratio of its software peers of 26 on the Goldman Sachs Software Index.

Grow your software revenue by selling these 5 affordable, essential tools for the modern workplace
By Staff Writers
Oct 28 2005
9:31AM