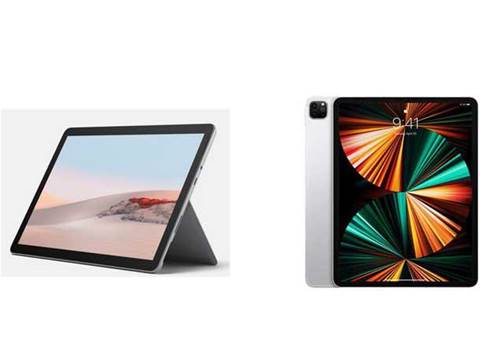 Demand for tablets such as Apple’s iPad and Microsoft’s Surface has taken off during the pandemic, with research firm IDC reporting that tablet shipments during the first quarter surged 55 percent. “While vaccine rollouts and businesses returning to offices may slow down the work-from-home trend, we are still far from returning to ‘normal’ working conditions and hence the demand for tablets, especially detachables, is expected to continue for a while,” said Anuroopa Nataraj, research analyst with IDC’s Mobility and Consumer Device Trackers, in a news release.

Two of the leading producers of detachable 2-in-1 tablets for productivity are Microsoft, with its Surface series of Windows 10 tablets, and Apple, with its iPad Pro series. Among the latest launches in the Microsoft Surface portfolio is the compact-sized Surface Go 2, while Apple has also recently updated its iPad Pro lineup, with additions including the new M1 chip. While both offer vibrant displays, detachable keyboards and strong battery life, there are some big differences between the latest iPad Pro and Surface Go—especially when it comes to the processor options, portability and price.

Which of the two tablets is the best fit for your needs and budget? What follows is our look at Microsoft’s Surface Go 2 vs Apple’s iPad Pro (M1) for 2021—with a comparison on display, keyboard, processor, battery life and other specs, as well as price.

For the iPad Pro, you’ll have to choose between two display sizes—11 inches or 12.9 inches. The Surface Go 2 is closest in size to the smaller iPad Pro model, with a 10.5-inch display (up from 10 inches on the first-gen model). The Surface Go 2 screen features resolution of 220 pixels per inch (ppi), and uses Microsoft’s vibrant PixelSense display technology. The resolution is well below that of the new iPad Pro models, however, which feature resolution of 264 pixels per inch. In terms of display technology, the 12.9-inch iPad Pro offers Apple’s new “Liquid Retina XDR” display, which is based on mini-LED display technology. The display on the 12.9-inch model includes 10,000 LEDs to create a more-realistic, “stunning” viewing experience, according to Apple. The display can also reach up to 1,000 nits of brightness, while the 11-inch model can reach up to 600 nits. Both are brighter than the Surface Go 2 display, which reportedly has a maximum of about 400 nits.

Both Apple and Microsoft tout their tablets’ compatibility with sturdy keyboards, featuring deep and comfortable keys—with 1 mm of key travel for both the iPad Pro and Surface Go 2 keyboards. The detachable keyboards are sold separately from the tablets. For the iPad Pro, the Magic Keyboard (with a trackpad) is available—as is the prior-generation keyboard design with no trackpad, the Smart Keyboard Folio. The Surface Go 2 also has two keyboard choices—one that features Alcantara fabric around the keys, and one that does not. Both detachable keyboards for the Surface Go 2 include a trackpad.

One area where the iPad Pro has a huge advantage over the Surface Go 2 is on the processor. For the 2021 iPad Pro, Apple has added the M1 chip—which previously had only been offered in Apple’s Mac lineup. The Arm-based, eight-core chip is aimed at enabling both improved performance and battery life.

By contrast, the Surface Go 2 does not include processor options with anywhere near the speed of the M1. At the base level, the Surface Go 2 includes a chip from Intel’s entry-level Pentium line, the Pentium Gold 4425Y. The fastest available processor is an eighth-gen Intel Core m3 chip.

On RAM, the iPad Pro also has more to offer—with options for 8 GB of RAM or 16 GB (the 16 GB of RAM option is only available on the models with 1 TB or 2 TB of storage.) The Surface Go 2 is configurable with 4 GB or 8 GB of RAM.

Both tablets offer cellular connectivity as an option. For the Surface Go 2, Microsoft offers optional LTE Advanced connectivity. The new iPad Pro, meanwhile, offers support for speedy 5G connectivity. In the U.S., that includes support for the higher-speed version of 5G, known as mmWave. Apart from the pricing, the Surface Go 2’s biggest advantage over the iPad Pro is on portability. Microsoft refers to the Surface Go 2 as the company’s “smallest, lightest 2-in-1,” with a weight of just 1.74 pounds (with the Type Cover keyboard) and a compact overall size.

Both the new iPad Pro and Surface Go 2 are designed to work well with digital pens, which are sold separately. For the iPad Pro it’s the Apple Pencil (which is now in its second generation), while the Surface Go 2 is geared toward working with the Surface Pen. On battery life, Apple and Microsoft are actually promising an identical amount of battery life usage per charge for their respective tablets. Whether you go with the Surface Go 2, or with either size of the iPad Pro, the maximum battery life promised is 10 hours on a charge.

On collaboration, the iPad Pro includes a 12-megapixel wide camera as well as a newly added 10-megapixel ultra wide camera. The new ultra wide camera is the basis for one of the new collaboration features on the iPad Pro, called Center Stage, which “automatically keeps users perfectly framed for even more engaging video calls,” Apple says. The latest iPad Pro also include four speakers and five “studio-quality” mics.

Apple’s new iPad Pro models with M1 are available to order now, but shipping times are seeing delays amid industry component shortages. The Apple website shows the base model 11-inch iPad Pro currently shipping between July 15 and July 19 —but the 12.9-inch model will take longer to get, with Apple’s shipping dates listed as between July 26 and Aug. 2.

In terms of pricing, the Surface Go 2 is by far the more affordable tablet in our comparison. For the tablet alone, the starting price is $620, for a model with the Intel Pentium chip and 4 GB of RAM. The get a Surface Go 2 with the faster Intel Core m3 chip and 8 GB of RAM, you’ll pay $1199. That is still significantly cheaper than the lowest-priced iPad Pro—the 11-inch model, which starts at $1199. However, that pricing will get you a much faster processor, in addition to a higher-res, brighter display and premium collaboration features. The 12.9-inch iPad Pro starts at $1649, meanwhile.

Eliminating departmental friction within MSPs
By Kyle Alspach
Jul 12 2021
11:07AM