Microsoft takes fight to Slack with free version of Teams 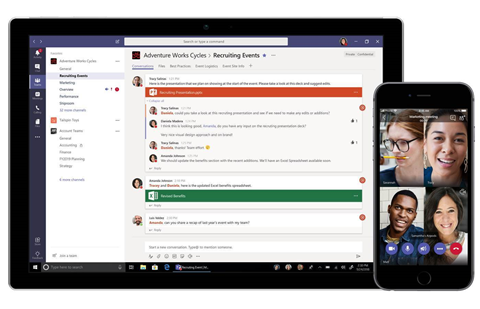 Microsoft is taking the fight to its collaboration competitors like Slack by releasing a free version of Teams to non-Office 365 customers.

The new free version of Teams is available from today for businesses with up to 300 users, and features unlimited chat and searches, audio and video calls, 10 GB of team file storage and another 2 GB per user for personal storage.

Microsoft introduced Teams in March last year, making it available as part of Office 365 to new and existing customers, in response to popular collaboration tools from the likes of Slack, Atlassian and Facebook.

It also provides access and integrations with the online version of Office 365 applications, including Word, Excel, PowerPoint and OneNote, along with more than 140 third-party application integration with the likes of Adobe, Evernote, Github and Trello. Microsoft also touted Teams' availability in 40 languages, with the company's translation service coming soon.

Microsoft has continued to add features to Teams since launch, such shifting its Skype for Business cloud customers into Teams, giving the new platform the ability to make and recieve landline and mobile calls.

The software giant said more than 200,000 businesses are already using the platform worldwide.

Microsoft said at the time that it had opened up the API set for Teams to allow partners to develop connectors for their customers' applications to integrate into the platform, which was taken up early by the likes of ServiceNow, SAP and Twitter.

Microsoft at the time said that there were also opportunities for traditional IT solution providers to integrate existing applications into Teams.

With the launch of the free version of Teams, Microsoft Australia's modern workplace lead Ian Heard told CRN there would be even more opportunities for its partners to migrate customers to a premium Office 365 or Microsoft 365 account further down the line.

"What we've learnt from Teams in the first 16 months is that, firstly, it's fantastic in terms of a straight off-the-bat free service or additional value inside Office 365," Heard said.

"But where the magic really happens around Teams is when our partners are involved in enabling organisations to integrate their existing workflows inside Teams, looking how they function in the organisation etc. For us, this free version just gives a bigger platform for our partners to be able to offer those types of services."

He added that offering Teams for free was the next logical step for the platform as it looks to compete in the broader collaboration market with the likes of Slack and Cisco's Webex Teams.

"With Teams, the monetisation opportunity has never been the license itself. Teams has always been part of a broader Office 365 license. The real value for partners that we’re finding is what Teams represents, and that's in effect a digital workflow application for our customers.

"What we're seeing is partners really finding it a great opportunity with workflow integration with integrating those third-party applications or first-party Office applications as being a great professional service and an ongoing revenue stream for many of our partners."

Eliminating departmental friction within MSPs
By Brendon Foye
Jul 13 2018
4:00AM